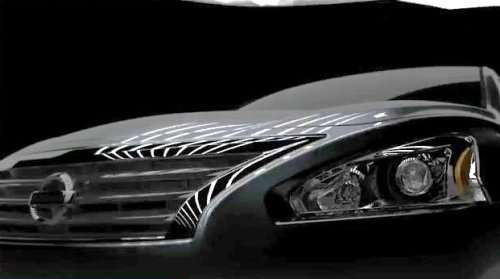 Nissan teases the 2013 Altima in a second video

Nissan Motors has once again teased the 2013 Altima ahead of the New York International Auto Show with a new 8 second video – this time showing a portion of the new front end and giving us our first look at the headlight and grille design of the new Nissan midsized sedan.
Advertisement

The 2013 Nissan Altima is set to debut in April at the New York Auto Show but since a modern reveal of a new model would be nothing without a good striptease of the vehicle before the debut, Nissan began showing off their new Altima in early March with a first video showing the car from above in a short video (click here for a look at the overhead view of the 2013 Nissan Altima). Today, we have the second video in that series, this time with an 8 second spot showing a sheet being pulled away from the front end of the 2013 Altima.

As was the case with the first 2013 Altima teaser video, the actual look at the car on the second video is very brief – only lasting about two seconds before being replaced by a red screen with a Nissan logo. However, these few sparse seconds of the 2013 Altima show a vastly sharpened front end with projection headlights and a far more aggressive grille.

The current Nissan Altima has headlights that flow up into the hood and fender of the car, wrapping around to the side a bit with an overall tall, narrowing shape. The 2013 Altima is completely different, with a design that runs side to side to create an angry, menacing look. The headlights are fairly small compared to the previous lens design and these new headlights are far more alike the bigger Nissan Maxima. Where the 2013 Altima differs greatly from the design of the current Altima or the Maxima sedan is the grille, which is much sharper than the current models and extends out over the headlight housings. This layout of the grille and headlights is separated by a hard, angular line that gives the front end of the new Altima a far more chiseled look – although when you look at both versions of the Altima (2012 and 2013), you can see the clear relation between the two based on this first look at the front end.

The 2013 Nissan Altima brings about a major debut for the Japanese automaker, with the growing popularity of the midsized sedan segment in the United States. The new Altima will surely offer a fresh, new look and shape but Nissan will also need to make strides in the fuel economy battle to continue to keep up with the likes of the Toyota Camry. The Camry has a slight advantage in fuel economy right now but the Camry also has the super efficient and very popular Camry Hybrid, which offers great fuel economy and a surprising amount of power for a vehicle that is so easy on fuel. The Altima hybrid has failed to meet those levels of popularity but this new Altima, which is expected to come with a hybrid trimline, could help Nissan tighten the battle between the two Japanese sedans.

The image above is captured from the video, showing the 2013 Nissan Altima. The image has been enhanced for easier viewing.