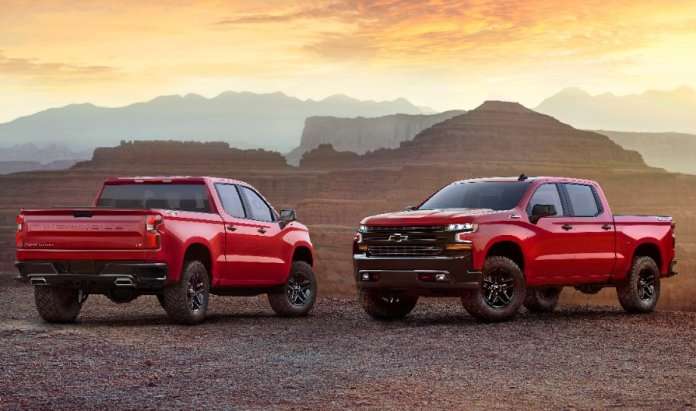 Next Generation Chevrolet Silverado's Surprise Debut Ahead of Detroit

This past weekend, General Motors introduced the world to the next generation Chevrolet Silverado pickup in its performance-minded Trailboss package – giving us our first look at the all-new Chevy pickup with a full debut set for the 2018 North American International Auto Show in Detroit.
Advertisement

General Motors held a special Centennial Event this past weekend in Dallas, Texas to celebrate the 100th anniversary of the Chevrolet Silverado. As you might imagine, there were plenty of Chevy trucks from the past century, but as a special surprise, GM dropped off a 2019 Silverado. Literally – they lowered it down from a helicopter and had it come charging out into the public eye in a pretty fantastic fashion, giving us an unexpected first look at the next generation Chevrolet Silverado.

“Our owners’ passion for Chevrolet trucks is truly humbling,” said Alan Batey, president of GM North America, and global head of Chevrolet. “Many of our owners depend on their trucks for work and play, personalize their trucks in astonishing ways and pass their loyalty for Chevy Trucks down from generation to generation. For the Chevy Truck Centennial, we wanted to recognize the customers who have made Chevrolet part of their lives, and have them help kick off the next 100 years of Chevy Trucks.”

Meet the 2019 Silverado
The details on the all-new 2019 Chevrolet Silverado are extremely limited, so we don’t know anything about the drivetrain, interior features or other packages, but to introduce the next gen pickup, Chevy picked their new Trailboss package.

The 2019 Chevrolet Silverado LT Trailboss builds on the off-road-ready Z71 package, but it adds a two-inch lift suspension setup and a set of beefy tires. Of course, it also has an entirely-new exterior, with a redesigned front end and back end, along with round wheel wells. At long last, the square wheel wells are finally gone and I cannot applaud Chevy enough for doing away with that odd bit of styling.

Finally, the press release accompanying the first images of the 2019 Silverado includes the following bit of vague information on the new truck.

“As no two truck customers are alike, the next-gen Silverado will offer an expanded range of models, more engine/transmission combinations and more technology and convenience features to help customers find their ideal truck.”

The 2019 Chevrolet Silverado will make its grand introduction next month at the 2018 North American International Auto Show in Detroit, at which point we can expect to learn everything that there is to know about the next generation Chevy truck. In the meantime, check out the video below of the surprise introduction in Texas.

Nick wrote on December 26, 2017 - 11:32pm Permalink
Doesn't matter what GM changes or adds these heaps of shit, they won't back up their products. They're still selling thousands of vibrators to their "loyal" customers and basically saying fuck off after you've signed on the line. I'd buy a Hyundai if they made a truck over another worthless heap from GM.
Bret wrote on January 16, 2018 - 11:26pm Permalink
Have owned Ford, Dodge, Chevrolet, Toyota trucks over the years. Compared to the 1968 Ford F-250 I learned to drive in, all makes are amazing today. However, GM, in my opinion, put the wrong people in charge of its pickup truck division. Compared to RAM and Ford, there is very little reason to buy a GM pickup other than heavy discounts. I also work extremely hard to buy “made in America” or buy from foreign companies that have invested billions and billions into the US economy like Toyota and Nissan. The Tubdra is an amazingly reliable very dated platform so it’s out of the question for me. Right now, if I were buying a new truck I’d wait for the RAM 1500 Longhorn or limited. I’m a custom home builder and do a lot of the work myself because of the severe shortage of trades. So I do use my truck every day for work. I currently drive an f-150 with 3.5 eco and max trailer package. I hauled firewood today to shut in homeowners who needed a cord of wood. I can’t quite justify a 3/4 ton truck with the capabilities of 1/2 ton trucks today. Although my accountant says I can depreciate the 3/4 ton at a much higher rate than the 1/2 ton.