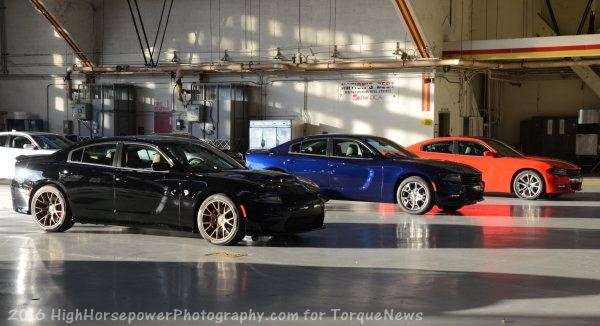 New insider information suggests that when the next generation Dodge Charger arrives around 2021, a new twin turbocharged 4-cylinder engine could serve as the fuel-sipping entry level option under the lineup of powerful Hemi V8s while the entire model line stands to lose some 500 pounds.
Advertisement

According to this insider, the base model engine of the next generation Dodge Charger will be the new “Hurricane” twin turbocharged 4-cylinder mill which will also motivate the next generation Jeep Wrangler. More importantly, the Automotive News insider stated that the engineering team is working to get the curb weight down around 3,500lbs, which would make it considerably lighter than the current sport sedan.

A 4-Cylinder Dodge Charger?
I am sure that more than a few of my regular readers are working to keep their heads from exploding at the thought of a 4-cylinder Dodge Charger. Many gearheads will insist that the Charger should only come with a Hemi engine, but in the ongoing effort to improve fleet fuel economy figures, a smaller, forced induction engine would help improve the fuel economy of the Charger lineup.

This Hurricane 4-cylinder will feature a twin turbo setup that will lift the output to roughly 300 horsepower, so this engine should offer similar horsepower to the current 3.6L Pentastar V6. Based on the output of other turbocharged 4-cylinder engines in this market, there is a good chance that the twin turbo 4-cylinder would offer a big torque advantage over the V6 and, more importantly, the Hurricane could offer significantly better fuel economy numbers than the Pentastar V6.

500lbs Lighter
Aiding in the improved fuel economy numbers will be the lighter and slightly smaller chassis of the next generation Charger, which will likely be based on the underpinnings of the new Alfa Romeo Giulia sport sedan. According to Automotive News, this new Charger will be around 500lbs lighter, with a base weight in the 3,500lb range. While the V8 models will be a bit heavier, this reduction in curb weight will have a positive impact on fuel economy across the range and, more importantly to many buyers, it will improve performance across the range.

Imagine the Dodge Charger SRT Hellcat with 500lbs shaved away. That would be a 707 horsepower car with a curb weight dancing right around the 4,000lb mark. Still not svelte by any measure, but we are talking about a Charger sedan that could only weigh a few hundred pounds more than a Ford Mustang.

vbondjr1 wrote on June 6, 2016 - 10:56pm Permalink
if you want fuel economy get a honda or hyundai or nissan or something like that. Honestly I really feel the Chevy Dodge and ugh...Ford, should leave their 4 & 6 cylinder cars to their other brands (i.e Buick, Chrysler and Lincoln and really focus on the Muscle cars. Honestly GM could afford to take their smaller cars and make them all Buicks and let the Camaro, Corvette, the SS and the trucks live on under the Chevy name with all V8 engines except the Colorado which should really only be offered in the 2.8L Duramax Diesel V6 and a 5.3L V8 while the silverados should have the 2.8L Duramax, the 5.3, the 6.2 and the 6.6L Duramax in all models 1500 and up. Dodge should really leave their four & six cylinders to Chrysler and go with the Barracuda, Challenger and Charger with all V8 options as well as their trucks. Ford needs to do so much different i don't even know where to begin. They need to start by getting rid of their modular engines and go back to real V8 engines for starters, next they need to let Lincoln have the Ecoboost engines and take the Ford lineup down to some simple players, the Mustang, a RWD sedan based on the S550/S650 chassis and their trucks and take those ecoboost engines out!!!!!!!!!!!!!
Something Sensible wrote on October 7, 2016 - 9:11pm Permalink
I don't even know where to start with this nonsensical garbage. Yes, 4-cylinders might be puny, but the fact that you can squeeze 300 or so horses out of a tiny engine tells me that this is the future we're heading to - big surprises in small packages. A crusade on these engines isn't going to do jack squat, but what do I know? I'm not some V8 fanboy with their heads shoved up their behinds by miles compared to a statement like yours, so /shrug
Wilbert wrote on October 8, 2018 - 2:21am Permalink
I am delighted that I noticed this blog, precisely the right information that I was looking for!