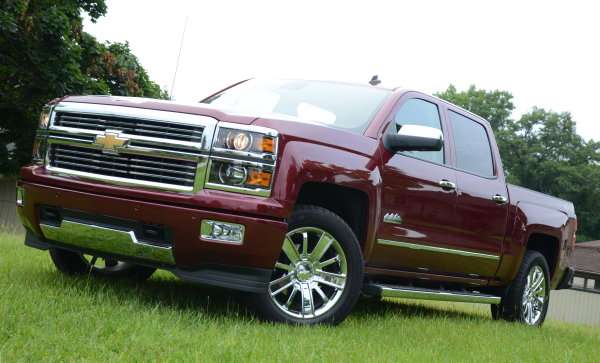 General Motors has recently launched an advertising campaign boasting about the advantages of the Chevrolet Silverado and GMC Sierra steel bodies compared to the Ford !50 aluminum body, but word around the watercooler suggests that the next generation full size GM trucks will follow Ford into the world of aluminum body panels.
Advertisement

Ford Motor Company took a big risk in using aluminum to craft the bodies of the 2015 Ford F150 pickup and while there are still plenty of critics who aren’t sold on the long term viability of the aluminum body, the concerns of the “change is bad” crowd hasn’t slowed sales any. In fact, Ford hasn’t been able to adequately fill the demand for the new F150, showing that consumers have no fears of a truck that is lighter, more efficient and more capable.

General Motors has replied to the early success of the aluminum bodied 2015 Ford F150 by launching an advertising campaign that highlights the strength advantages of steel over aluminum, although that commercial really doesn’t do much good in showing that the steel Silverado is better than the aluminum F150. Perhaps GM is only trying to poke a little fun at Ford, as they don’t want to trash talk technology that they are likely to use in the future.

Based on a report from Reuters, the next generation full size trucks from General Motors will make use of aluminum body panels as well as more high strength steel – just like the F150.

Investment in Flint Truck Plant
GM recently announced that they would be investing $877 million into their truck plant in Flint, Michigan to build future large trucks and sport utility vehicles. The information on the exact upgrades is short, but Reuters spoke with someone familiar with the company’s plans and this $877 million will go to add all of the items needed to build aluminum bodied Chevrolet Silverado and GMC Sierra pickups.

When the Ford F150 plants in Detroit and Kansas City were upgraded to build the aluminum F150, it required extensive changes to the machinery in those plants and we can expect that the same will be true when GM shifts from trucks that are predominantly steel to bodies that are lightweight aluminum like the new F150.

Advantages of Aluminum
While moving to a Chevrolet Silverado or GMC Sierra body which is comprised heavily of aluminum will require expensive and extensive retooling of the production facilities while also increasing the base price of the trucks, the shift to aluminum in the next gen Silverado and Sierra should have the same key advantages as it did for Ford.

Since the body will be significantly lighter, the next gen Silverado and Sierra will have a lower curb weight without removing any of the functional components. A lighter truck leads to improved fuel economy and better use of the available power, so we can expect to see improved towing and hauling numbers as well as improved performance numbers – for those truck drivers who like to go fast.

According to these reports, the next generation Chevrolet Silverado, GMC Sierra and large SUVs aren’t due until 2018, so it will be quite a few years before we see an aluminum bodied GM truck. In that time, the Ford F150 could run into troubles with their aluminum bodies, at which point GM might rethink their future plans – but based on what we have seen so far, it looks as though the Chevy and GMC half ton pickups will follow the trend of the 2015 aluminum F150.

Larry wrote on December 17, 2015 - 1:27am Permalink
I can honestly see EVERY manufacturer doing the same thing. And not just to their full-size pickup trucks, but to everything that they make. It will happen, unless somebody comes up with a better material than anodized aluminum.