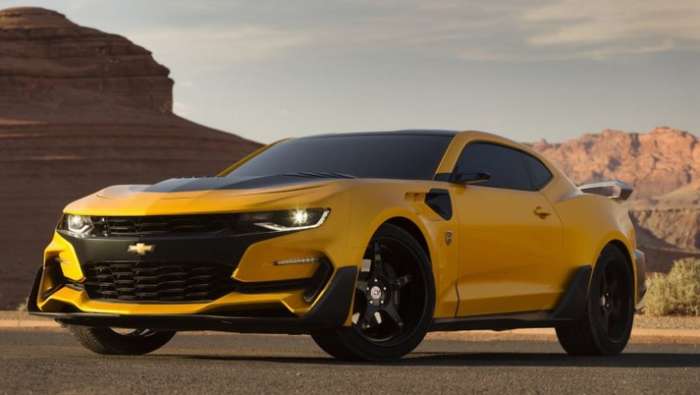 Transformers 5 is on its way and once again, the leading role of Bumblebee will be played by a yellow and black Chevrolet Camaro, with the newest and most extreme Transformers Camaro being based on the new 6th gen models – although very few aspects of the exterior design are shared with the production muscle car on sale at your local dealership.
Advertisement

The image above showing the newest Transformers Chevrolet Camaro hero car is the only one available – having been tweeted by director Michael Bay – but it is all that we need to discuss this truly unique 6th gen GM muscle car.

Transformers 5 Bumblebee Camaro
As has been the case with all of the new Transformers movies, Bumblebee will serve a major role on the Autobots team and unlike the cartoon version which was based on a relatively boring Volkswagen Beetle, the movie version is based on the far more formidable Chevrolet Camaro. Michael Bay has been using the Camaro for Bumblebee since he rolled out his first Transformers movie back in 2007 and in most cases, the muscle car featured in the movie has been modified from the standard production unit.

For Transformers: The Last Knight (movie #5), Bay’s design team turned their attention to the new 6th generation Camaro, adding enough visual changes that it is hard to tell what type of Camaro this might be.

From this single, low angle view, it looks like this Camaro might have the bulging hood of the new ZL1, but the far more notable design change is the front fascia. This Camaro has a unique grille that extends further towards the ground with a new “bumper” portion through the middle wearing the gold Chevy bowtie. It also has an incredibly aggressive lower front fascia with a chin spoiler and huge winglets on the side, right against large cooling ducts.

The Transformers 5 Camaro has what looks to be ports of some sort on the fender, another set of winglets in front of the rear wheels and a large rear spoiler. Finally, the whole car is painted bright yellow with black accents and fitted with Autobots logos and some unique wheels.

It is very different than the production model and while it has received mixed reviews, I like the looks of this Camaro as movie cars go.

Future Production Styling Cues?
While the Chevrolet Camaro shown above is nothing more than a Hollywood car right now, some outlets are predicting that the newest Bumblebee could hold clues to the next Camaro styling refresh. While the lower fascia and the winglets are a bit too outrageous for production, the larger, more fluid grille looks like something that could fit into a production plan. However, I’m not going to hold my breath on a car coming to my local Chevy dealership that looks like this one.

On the other hand, with the 2016 Camaro being featured in the upcoming movie, I would expect to see another special edition Transformers or Autobots edition. The key difference is that the production version of the special edition will likely just be an appearance package with yellow paint, black trim and special badging.