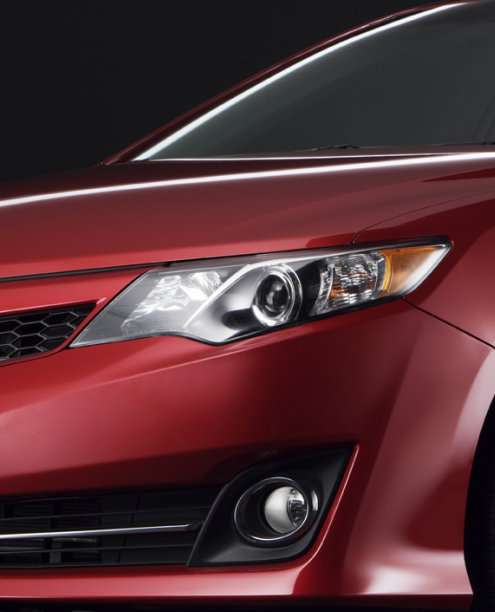 A new teaser of the 2012 Toyota Camry hits the web

While the video of Akio Toyoda discussing the 2012 Toyota Camry has mysteriously disappeared after appearing on a variety of YouTube channels, today Toyota Tweeted the newest teaser of the 2012 Camry – this time giving us a good clear look at the driver’s side front corner of the new sedan.
Advertisement

The newest 2012 Toyota Camry teaser gives us our best official look thus far, with a sharp, angular headlight with featuring a central projector housing, fog lights and black egg crate style grille material in the upper and lower fascia areas – with a thin chrome strip running along the lower fascia opening that looks to be much larger than the outgoing model.

Next, we see hard body lines that run from the ground up to the outer edge of the headlight in this 2012 Camry teaser, with a similar distinct crease creating the front wheel opening. Overall, the 2012 Toyota Camry looks like it will go away from the bland, vanilla styling of the previous model which comes as no surprise seeing as how competitors from the US and Korea have gone a similar route with aggressive styling on newer models.

We don’t have any indication as to what trimline is shown in the newest teaser of the 2012 Toyota Camry but if we had to guess, this is probably a higher end trimline like the XLE – perhaps clad with some sort of sport package to bring in the body colored grille outers and blacked out inner grille portion. One thing that we do know thanks to a handful of recent spyshots is that this is not the 2012 Toyota Camry Hybrid, which has fog lights mounted out away from the lower grille opening in a chrome bezel with another chrome piece running along the top of the upper grille where this one is all body color.

The Toyota Camry has often been accused of being boring and vanilla so it will be interesting to see if the 2012 Camry will have enough physical upgrades to help it stand out in a very competitive sedan segment. Based on what little Toyota has shown us thus far – it looks like the 2012 Toyota Camry could have the styling cues to allow the popular sedan to finally have some attitude to keep up with the styling improvements of the competition.

The 2012 Toyota Camry is expected to make its grand debut on August 23rd in Detroit, Los Angeles, New York and Georgetown Kentucky and TorqueNews.com will be at the Detroit unveiling – bringing you the first look at the refreshed 2012 Camry! Click here for more on the official unveiling of the 2012 Toyota Camry!

Used pickup trucks wrote on August 5, 2011 - 2:13am Permalink
Toyota has been launching a new brand in recent time that also with a good features and style, and with a good engine power, the new 2012 toyota carmy had made rocking as its an hybrid car.
Acura TSX wrote on August 5, 2011 - 5:45pm Permalink
Acura TSX much? Or Kia Forte..... or Kia Amanti p.s. I love Camry's, I've owned 4 myself.. and I love the current shape. I HATED, HATED 2002-2006, wtf was that ugly Dodge-looking bubble car?