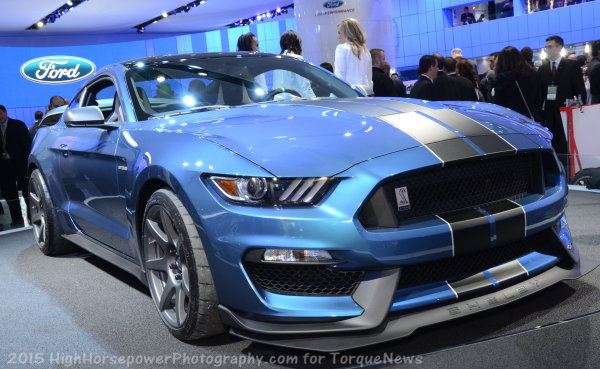 The Mustang community is eagerly awaiting the dealership arrival of the new Shelby GT350 and GT350R versions of the 2016 Ford Mustang, but leaked information suggests that the two premium performance pony cars will have limited production numbers – especially for the GT350R.
Advertisement

I want to start by explaining where the production numbers for the 2016 Ford Mustang Shelby GT350 and GT350R, as it is one of those “I heard from someone who heard from someone” situations. Evidently, Manny Galvin of Gaudin Ford posted on Facebook the alleged 2016 Shelby Mustang production numbers and while that post was quickly removed, the Mustang lovers at Mustang6g.com got ahold of those numbers and posted them on their website.

This means that these 2016 Mustang Shelby GT350 production numbers are not officially official, but considering the dealership connections of the original source, these are likely the numbers told to Ford dealers by Ford Motor Company. These aren’t officially announced, but the source is good enough to believe that these are the actual 2016 Shelby Mustang production numbers. Plus, these numbers seem very realistic – although the numbers might seem low for those looking to score one of the higher performance GT350R Mustangs.

2016 Shelby GT350 Mustang Production Numbers
According to the now-removed Facebook post, production of the 2016 Ford Mustang Shelby GT350 will be limited to 5,000 units, while the higher performance Shelby GT350R Mustang will be limited to just 500 units. In the grand scheme of things, 5,500 cars might not seem like very many examples of the new Shelby Mustang, but if Ford sells all 5,500 Shelby GT350 units during the 2016 model year, it will be far more successful (in terms of sales) than the previous generation Boss 302 or Shelby GT500.

Considering the demand for the Boss 302 and Shelby GT500 Mustangs in 2012 and 2013, the 2016 Shelby GT350 Mustang could be a tough car to find if Ford is only building a total of 5,500 units. When you look at the sales numbers for the Boss 302 and GT500 models and then add in the high level of interest in the all-new 2015 Ford Mustang, there is a good chance that the demand for the 2016 Shelby GT350 will far exceed the projected production numbers.

In other words, if you want to buy a 2016 Ford Mustang Shelby GT350 or GT350R, it is a good time to start making friends at your local Ford dealership.