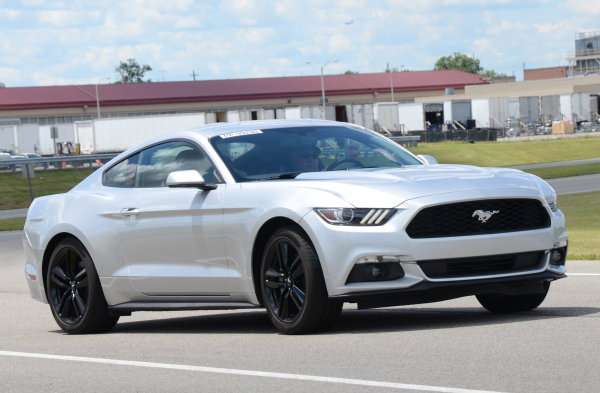 We have talked in the past about how the 2.3L EcoBoost engine from the 2015 Ford Mustang could power a new high performance Focus RS and while the Motor Company hasn’t had much to say about the formally Europe-only hot hatch, there are some new rumors floating around on the arrival of the highest performance Focus for the US market.
Advertisement

Now that the 2015 Ford Mustang has been introduced with the powerful new 2.3L EcoBoost 4-cylinder engine (pictured above in silver), there seems like a far better chance that American sport compact buyers could soon get their hands on a Ford Focus RS. There hasn’t been any official word from Ford regarding a new, higher performance Focus than the current ST model, but there are new reports based on inside information that there is a Focus RS headed for US shores and it will be powered by a 2.3L EcoBoost engine similar to the one in the 2015 Mustang.

The Focus RS: America’s Forbidden Fruit
For years now, Ford Motor Company has offered a high performance version of the Focus compact hatchback in Europe, but American sport compact buyers haven’t gotten any sort of modern high performance Focus until the new Focus ST arrived in 2012 (shown above in Tangerine Scream). While the new Focus ST is awesome, it is still a far cry from the European Focus RS. However, when the Focus ST was launched, a Ford rep who has asked to remain anonymous told me that if the Focus ST did well in the US, there would be a good chance that we could see a Focus RS. Well, the Focus ST has done well and that leads me to believe that the odds have improved of US buyers getting an RS package and the usage of the new 2.3L EcoBoost in the Mustang improved those odds even more.

The American Ford Focus RS
According to the folks from The Truth About Cars, the Ford Focus RS will arrive in the US market for 2016 and when it does, it will feature a 2.3L EcoBoost engine with somewhere in the area of 325 to 350 horsepower. It should be noted that the 2.3L EcoBoost engine in the 2015 Mustang offers 310 horsepower and 320lb-ft of torque, but that engine is marketed as an economy-performance option. In the Focus RS, it will be strictly performance so the power estimate of 325-350hp could be right on the mark…although I would expect to see the official number towards the lower end of that scale. More importantly, the torque output would likely be somewhere in the area of 340-360lb-ft, which would make for one wicked fast 5-door hatchback.

In addition to that powerful EcoBoost engine from the 2015 Mustang, the 2016 Focus RS would feature a proper 6-speed manual transmission and an advanced all-wheel drive system that would allow drivers to make the most of all of that power. We can also expect the Focus RS to be the most aggressively designed Focus model in the US with Recaro seats giving it a sportier interior feel. Also, expect a track ready suspension setup and some massive Brembo brakes that should allow this to be one of the best sport compact performance cars in the US.

This Focus RS could be the American car to knock off the Subaru WRX STI as the king of the American sport compact segment.