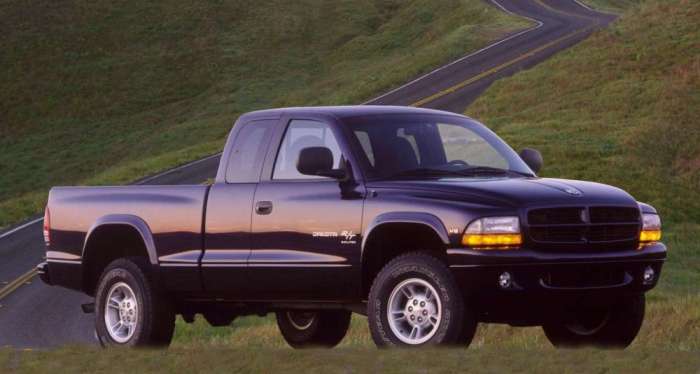 We learned back in early June that the Ram brand was planning to reenter the mid-sized truck segment and in a new report from Automotive News, this modern-day-Dakota will be built at the same plant as the Jeep Wrangler pickup – suggesting that the two could be closely related.
Advertisement

Through the 1980s, 1990s and 2000s, the Dodge Dakota and later the Ram Dakota was one of the top contenders in the American mid-sized truck segment. However, in the same way that Ford killed the Ranger, Ram killed the Dakota to focus on full-sized trucks at a point in time where there was much more interest in the bigger trucks. Since then, there has been a revival in the mid-sized truck segment, led by the Toyota Tacoma, the Chevrolet Colorado, the GMC Canyon and later this year, the new Ford Ranger.

With all of the key competitors in the American truck race offering a mid-sized truck, Ram is getting back into it, as was revealed back in June during an investor’s presentation in Italy. We don’t know exactly when it will arrived, but provided that FCA makes good on the promise to get Ram back into the mid-sized segment, there could soon be a new Dakota at your local Ram dealership.

More importantly, Automotive News has reported that an insider has informed them that the new Ram mid-sized pickup will be built at the Toledo Assembly Complex. This is the same build site as the upcoming Jeep Wrangler pickup, so there seems to be a good chance that the Wrangler pickup and the new mid-sized Ram will share a chassis.

Shared Jeep Pickup Parts
The Jeep Wrangler pickup might be one of the vehicles that has been discussed in rumors for the longest period of time before finally coming to production. It seems like we have been talking about the demand for a Jeep pickup for at least a decade, but we finally know that it is coming soon. The anticipation around the Jeep pickup will almost surely help it sell well, but with any chassis platform, the best way to make money is to use that platform across multiple vehicles.

How the Ram Fits
Some of you might be wondering how the mid-sized Ram will be different from the mid-sized Jeep Wrangler pickup. The biggest difference will, of course, be the bodywork, but with the unique shape of the Wrangler, there is a bit of a constraint on interior and cargo area dimensions. On the other hand, the Ram could sport a bigger, beefier body that would lead to more interior space and more cargo space out back.

More importantly, the mid-sized Ram will be priced similarly to the key competitors from Toyota, Chevy and Ford. If I had to guess, the Wrangler pickup will be slightly more expensive, as the popular Jeep is generally more expensive than other mid-sized SUVs because it can do more than mid-sized SUVs. That will likely be true of the Wrangler pickup as well, but with the Ram on the shared chassis, FCA can look to offer a lower price point with the unique interior and exterior design.