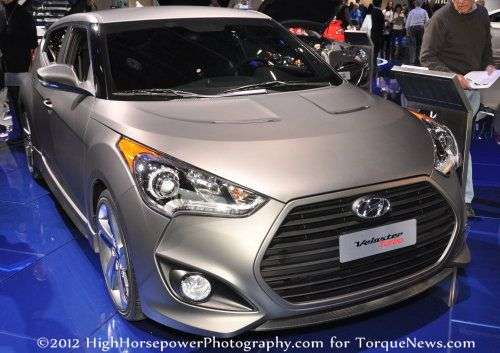 When the 2013 Hyundai Veloster Turbo hits the streets later this summer, reports indicate that the high performance 4-door hatchback could carry a starting price of just $21,500 before (destination fees), making it one of the more affordable hot hatches available in the US market.
Advertisement

The 2013 Hyundai Veloster Turbo made its grand debut last month at the 2012 Detroit Auto Show, at which point Hyundai boss John Krafcik dropped nearly all of the details on the new turbo hatchback…except for the price. However, thanks to the good people at the Inside Line, the 2013 Hyundai Veloster Turbo will start at $21,500 (plus destination fees) – an increase of $4,200 over the current base model Veloster equipped with the 6-speed manual transmission. That might seem like a hefty chunk of change for the high performance package but it should be kept in mind that the Veloster Turbo is likely going to be equipped with much more than just an extra 63 horsepower.

In addition to the turbocharged engine, the 2013 Hyundai Veloster Turbo will features a unique front and rear fascia, unique exhaust tips, unique side sills, enlarged braking components and package specific wheels wrapped in high performance tires. The current production Veloster offers two upgrade packages that are each $2,000 – the Style Package and the Tech Package – and we can expect to see at least some of the features from these two option packages (such as the leather seat bolsters and leather wrapped steering wheel) make it into the Veloster Turbo standard equipment list. A fully loaded 2012 Veloster carries a price of almost $22,000 so depending on which goodies from the upgrade packages make it into the Veloster Turbo standard equipment list, the price increase for the Turbo package may not seem so extreme. We may also see upgrades drivetrain and suspension components including suspension and driveline components to handle the added power.

The most important part of the 2013 Hyundai Veloster Turbo is the turbocharged 1.6L ‘Gamma’ 4-cylinder engine that churns out 201 horsepower and 195lb-ft of torque – a substantial increase over the current Veloster models that offer just 138 horsepower and 123lb-ft of torque. Like the standard Veloster, the 2013 Veloster Turbo will be available with either a 6-speed manual or automatic transmission but the Veloster Turbo will pack a traditional automatic transmission; not the dual clutch unit found in the standard Hyundai 4-door hatchback.

Hyundai has done a great job of offering aggressive, distinct models and when combining the current handling and ride quality of the 2012 Veloster with the upgrades made for the 2013 Veloster Turbo – Hyundai might have a big hit on their hands in the performance car segment later this year.

Check out our gallery on the right for a closer look at the 2013 Hyundai Veloster Turbo from the Detroit Auto Show debut!

Source: The Inside Line