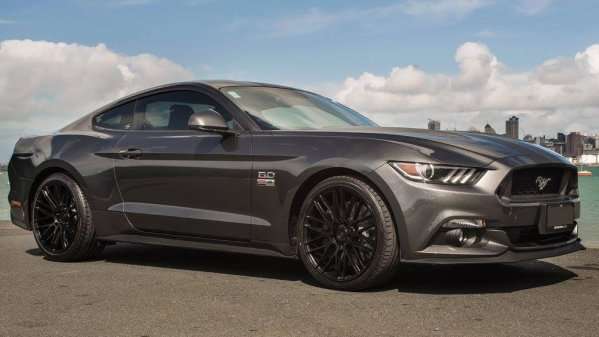 The new Ford Mustang is sold out in New Zealand into well into the 2017 calendar year, but someone with deep enough pockets could drive away a new 2016 Mustang GT later this month while also making a contribution to a children’s cancer charity.
Advertisement

Normally, I wouldn’t write an article about something as normal as a Ford Mustang GT going up onto a New Zealand online auction site, but with the newest pony car being so popular in Australia and New Zealand – and with the proceeds of this sale benefitting a New Zealand Children’s cancer charity – this is the kind of news that I like to discuss.

Like many markets outside of the United States, the new Ford Mustang has proven to be so popular that it is sold out well into the 2017 calendar year. In other words, unless you ordered a new Mustang months ago in New Zealand, making an effort to buy one now would mean that you might not get it for more than a year.

However, if you are a New Zealander with some serious extra cash laying around and you don’t mind making a pretty sizeable contribution to charity, you could be driving your new Mustang GT with more than 400 horsepower as soon as June 17th.

Camp Quality Ford Mustang Auction
The new Ford Mustang GT is being auctioned off in cooperation with Auckland Ford dealership John Andrew Ford. The details are short, but we know that this car has some extra goodies, which amount to a total retail value of $115,000. A standard Mustang GT lists for $77,880, so this car must have a long list of features. We do know that the dealership conducted a series of online polls last year to find out which optional features locals liked the best and when those polls were wrapped up, this Mustang GT was the result.

However, the list of features and the value of the Ford Mustang GT being given away aren’t the highlight of this piece. That fact that someone can buy this Mustang and being driving it in New Zealand later this month is the key point here, as it eliminates the length waiting list. The car will go up on the New Zealand website TradeMe later this week and the auction process will wrap up on June 16th Camp Quality black tie dinner and auction.

The winning bidder will be able to pick up his or her new Mustang on June 17th at John Andrew Ford and all of the proceeds will go to Camp Quality – a charitable group that provides annual summer camps and year-round support to the families of children with cancer.

It is a great cause and if you live in New Zealand and didn’t plan ahead – this might be your only chance to buy a new Ford Mustang during the 2016 calendar year.