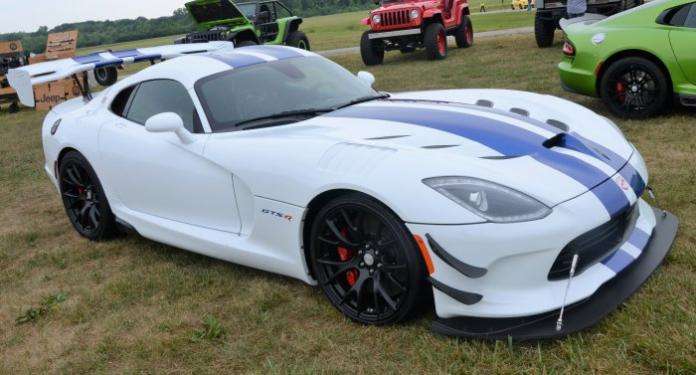 Last month we reported that the crowdsourced funding program to send the newest Dodge Viper ACR to the Nürburgring for a record run attempt had succeeded and based on information of our sources, the ‘Ring record attempt for the new Viper program is currently underway in Germany.
Advertisement

The 2010 Dodge Viper American Club Racer is officially the fastest American car to ever lap the Nürburgring Nordschleife and when endurance racer Dominik Farnbacher set that record back in September 2011 with a time of 7:12.13, it was the fastest lap time ever turned in by an actual production road car – trailing only the Radial SR8 and the Gumpert Apollo Sport (both of which are race cars legal in some areas of the world) in terms of lap times for street legal vehicles.

Even though the 2010 Viper has fallen from the top of the list, FCA did not make a record attempt with their newest Viper American Club Racer (ACR), instead spending their track time setting a bunch of records all over North America. The 5th generation Viper ACR has proven to be significantly quicker than the 4th gen car which set the Nürburgring record 6 years ago, so it seems likely that the newest ACR could get around the ‘Ring even faster, but the automaker didn’t take their shot during the short time that the 5th gen Viper ACR was available.

Fortunately, a crowdsourced funding program raised more than $156,000 to send a pair of new Dodge Viper ACR Extreme models to Germany to take a run at the Nürburgring record. According to sources which prefer to remain anonymous, the team responsible for making the record run is in Germany right now, and that new record announcement could come as soon as the end of this week.

Vipers on the Nürburgring
The crowdsourced program led by Russ Oasis to get the 5th gen Viper ACR over to Germany for a Nürburgring record run includes a pair of Dodge Viper ACR Extreme models which have been provided by the Viper Exchange. The driver pairing handling the record attempt consists of Dominik Farnbacher and Luca Stolz, so the cars are in experienced hands, with Farnbacher setting the previous Viper ‘Ring record and when it was announced that the group had reached their funding goal – it was expected that they would make the run sometime in July.

Well, July is nearing an end, so it came as no surprise that some images showing a white Dodge Viper ACR Extreme in action on the Nürburgring have surfaced in the past 24 hours. More importantly, in speaking with someone involved with the run who wishes to remain nameless, it was confirmed that the cars and the drivers traveled to Germany earlier this week with the expectation of being on the track before the end of the week.

While we will have to wait and see what kind of lap times the new Dodge Viper ACR Extreme turns on the Nurburgring, it should almost certainly be at least a little quicker than the 2010 version. The new Viper ACR has stickier tires, bigger brakes, better aerodynamics, better suspension parts and more power, so it is practically guaranteed that Farnbacher and Stolz will set a new Viper record – we just have to wait to see how much lower that old Viper record of 7:12.13 can drop with the new ACR.

Of course, as soon as news on the lap times for the new Viper is available, you’ll find it here on TorqueNews.com.