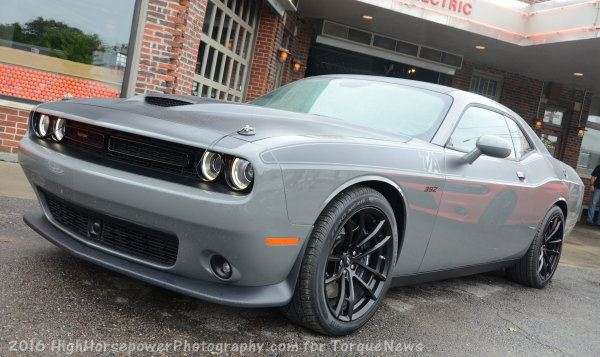 Leading up to the Woodward Dream Cruise, Dodge introduced the new 2017 Challenger T/A with either the 5.7L Hemi or the 392 Hemi and while some will complain that these new trimlines are not elaborate enough – I think that this new Challenger T/A is a perfect package for the current muscle car market.
Advertisement

As we reported when the 2017 Dodge Challenger T/A was introduced, this new package will be offered in three trimlines – the standard T/A and the T/A Plus with the 5.7L Hemi and the T/A 392 with the 485hp, 6.4L Hemi. The T/A and T/A Plus with the 5.7L Hemi is a great package for those buyers who want more vintage styling and a little more performance from their Challenger R/T, but I find the Challenger T/A 392 to be a far more enticing package for muscle car shoppers.

You might be thinking that the Challenger T/A 392 is only the more enticing package because it has more power, but this is about more than just power. This is about Dodge looking at their two most popular Challenger models – the Scat Pack and the Hellcat – and applying aspects of those models to other models while also beefing up the Scat Pack based on customer input. At the same time, there are some folks online complaining that the Challenger T/A is just a buzz model with stripes and a new name, so I wanted to take a minute to break down why this car is far more than just a sticker package.

The Scat Pack was and still is an enormous success, but buyers still talk about ways to make the 485hp Challenger even better. Lighter wheels, bigger brakes, the air catcher headlight and a more unique hood from the standard Challenger R/T hood were among the most common requests online, so it comes as little surprise that the new Challenger T/A 392 features all of those changes and more.

The Challenger T/A 392 starts with the Scat Pack, but the T/A package adds dual air catcher headlights, a Hellcat-like satin black hood with a functional cold air intake system, huge six piston Brembo brakes from the Hellcat, lightweight 20 inch wheels similar to the Hellcat, the same high performance tires from the Hellcat, the new active performance exhaust system, a uniquely tuned suspension setup and the stunning T/A graphics – all of which make for a very different muscle car. Click here for a full breakdown on the differences for all three 2017 T/A packages.

While the majority of the interior remains the same, it is hard to say that the Challenger T/A 392 is a gussied up Scat Pack when you consider the fact that the T/A has different wheels, tires, brakes, suspension, headlights and a hood. Many items which make the Hellcat Challenger so impressive have been added to the new Challenger T/A, which in my opinion will make this package even more popular than the Scat Pack. The company is using the continued popularity of the Hellcat package to improve on one of their other most popular package in the Scat Pack, and they are doing this while both the Hellcat and the Scat Pack are still ultra hot.

Oh, on top of the fact that the Challenger T/A is so well thought out, considering the current success of the Challenger Scat Pack and the Challenger Hellcat, there is also the pricing of the new T/A to help it sell. The T/A 392 with destination starts at just $45,090. That is more than $5,000 less than the Challenger SRT 392, which isn’t all that different. With that pricing in mind, I really expect to see the new Challenger T/A 392 sell like crazy, but I also wonder if the success of the T/A package will kill off the SRT 392. Time will tell, but in the meantime, prospective Mopar muscle car buyers have several great new options.

David Dandy wrote on August 29, 2016 - 6:13pm Permalink
These new packages are great in my opinion. Strategically, they drop in at the right time to boost sales and keep the sales trend going up as well as putting more pressure on Chevrolet and their falling Camaro sales. I have a 2015 SRT 392 and I think it makes my car more unique and stand out more because it's not one of the Scats or T/A 392's. All these cars are awesome. Great job Dodge!
Lw wrote on October 19, 2018 - 12:46am Permalink
Camaro sales at not failing they are the number one selling pony car not to mention the best preforming.
Greywolf74 wrote on May 6, 2020 - 10:10am Permalink
I mean you cant really say that you SRT is more unique than a 392 T/A because theyve made waaaaaaay less T/As than SRTs. All their cars are awesome though, I agree with ya there :)
Bob wrote on September 6, 2016 - 11:23am Permalink
Not a Hellcat hood tho, so technically there's aspects taken from the SRT 392 and Hellcat , not just the Hellcat alone. If it's a dual headlight intake, that would be a new feature available only on the TA. Until they offer the Laguna Leather in the lower models, the SRT needs to stay. A real change would be putting AWD on the TA and really pulling towards a rally car.
Willy wrote on September 10, 2016 - 9:00pm Permalink
Dual front light air holes, but they need to make both functional. Maybe a Hell Cat precursor, but can't go wrong w t/a b/c of a s/c option mod, and u have a faster car than HC.
John Woodell wrote on September 10, 2016 - 12:00am Permalink
All this is still priced way too high...but good marketing strategy for the challenger
Joe wrote on October 18, 2016 - 8:26pm Permalink
Great package for the challenger, but as usual especially in NY the greedy dealers are gauging as usual!! For example they will have ten hellcats in stock and they want over sticker price !! Give me a break car is out two years!! I will go out of state before I buy in NY !! I got 1 price for a t/a which came in higher than a loaded stt8 !
Ken Allen wrote on August 1, 2018 - 9:46pm Permalink
The T/A 392 is a blast to drive and draws attention like a U.F.O. not to terrible in the corners given the 4000 + pounds, gas milage sucks because I can't keep my foot of the gas pedal. People can say negative things about my car and I just don't care, it is extremely fast and the most fun you can have for the money, I would buy this car again, it is very reliable. MOPAR OR NO CAR thanks and have a great day.