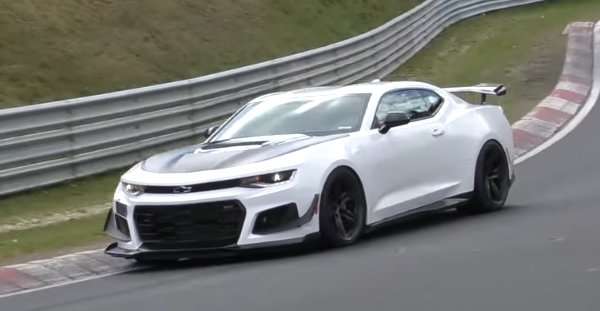 New footage has arrived online showing the 2018 Chevrolet Camaro ZL1 1LE lapping the Nürburgring without any sort of camouflage – meaning that the company might be working on setting a new record lap for the quickest muscle car around “The Ring”.
Advertisement

Yesterday afternoon, we took a look at the possible Nurburgring times for the 2018 Chevrolet Camaro ZL1 1LE and today, we have video of the supercharged track terror in action on the world’s most famous road course. Stateside Super Cars – the same YouTube channel which captured footage of what appears to be the next Corvette ZR1 testing at the Nurburgring – has now posted a video of the 2018 Camaro ZL1 1LE testing without any camouflage of any sort, so there is no question that this is the supercharged ZL1 with the track-ready 1LE package.

ZL1 1LE, not the Z28
This isn’t the first time that we have seen the Chevrolet Camaro ZL1 1LE testing on the Nürburgring, but this is the first time that we have footage of the car since the package was formally introduced. A Camaro test car with a suspiciously similar aero package to the 1LE crashed on film at the Nürburgring last year and at that point, it was assumed that what appeared to be a more extreme Camaro than the ZL1 was the next Z28. Of course, with the Chicago debut of the ZL1 1LE, we know that the car which crashed in Germany last year was almost certainly the ZL1 1LE and not the next Z28, so while we have seen this car on this track in the past – this is the first time that we have knowingly seen the ZL1 1LE working out on the world’s toughest road course.

Listen to the ZL1 1LE Roar
The videographer who captured the 2018 Chevrolet Camaro ZL1 1LE testing at the Nürburgring is stationary, but he or she caught the newest supercharged Chevy at a few different points on the track. Each short clip within the video begins with the Camaro entering the frame as it tackles a turn and then accelerating away from the camera, allowing us to hear the roar of the LT4 as the car approaches and as it drives away – while also giving us a good look at the 1LE suspension at work as the Camaro blasts through the turns.

In the short clip which begins just before the 2-minute mark, it appears as though it is either snowing or raining at the Nürburgring, yet the Camaro ZL1 1LE continues to race around the track. In other portions of the video, it appears as though the track surface is damp, so let’s keep our fingers crossed that the team got at least a few nice days to test the ZL1 1LE in order to get a proper record Ring time. Remember, the 5th gen Camaro Z28 was the previous record-holder for American muscle cars and that Chevy turned in its record time in the rain. Hopefully, the same fate doesn’t strike the ZL1 1LE.

In any case, this footage of the 2018 Chevrolet Camaro ZL1 1LE testing at the Nürburgring doesn’t reveal anything new, but it gives us all hope that there is news of a new record lap time coming for the American muscle cars at the infamous German road course.