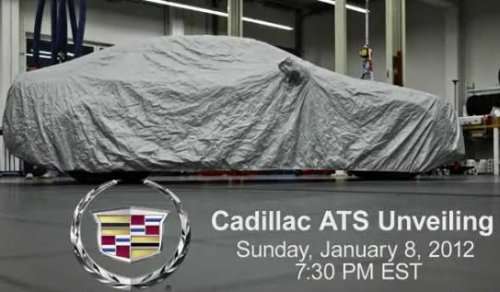 The new Cadillac ATS will debut online this Sunday

We have expected for some time now that the new Cadillac ATS, the Caddy slated to be General Motors’ new BMW 3-Series fighter, would be coming to the 2012 Detroit Auto Show but we have now learned that the new midsized sedan will actually make its grand debut online on Sunday, the night before the Motor City show opens to the media.
Advertisement

When the people from the North American International Auto Show published the official press conference list, it seemed odd that Cadillac did not have a slot when many expected the new ATS to make its debut in Detroit. Was the car slated to take on the best in the midsized luxury sedan market (the BMW 3 Series) really just going to be sitting there… introduced to the world without any grand to-do? Well, it appears now that the answer to that is yes and no. Yes, the Cadillac ATS may just be sitting there and no, it will not meet the world without a big production but rather than just introducing the Cadillac ATS to media in Cobo Hall – the ATS will be introduced to the whole world at one time via the internet.

As you can see below, right now the website that will be streaming the introduction of the new Cadillac ATS offers just an image of what is presumably the new ATS under your run of the mill grey car cover - loosely fitting of course – in what looks to be a shop setting. Below the covered car, it plainly reads “Cadillac ATS Unveiling Sunday January 8, 2012 7:30 PM EST”, with the Cadillac crest proudly displayed next to the text announcement. We can guess that come Sunday night, this room with the covered Cadillac ATS will be filled with a variety of Chevrolet/General Motors executives and maybe some engineers with a big production leading up to the formal unveiling. They might go on to talk about the specifications, engine options (we are expecting a turbocharged 4-cylinder), transmission options (we are also expecting a manual transmission) and the other goodies including interior gadgetry.

What we can expect on Sunday is for General Motors to show off the new Cadillac ATS while talking up the specifications and capabilities but what if Cadillac goes one step further and shows us the capabilities? The garage in which the covered Caddy ATS on the unveiling website could be something as simple as one of the GM design or build studios but it could also be something more interesting – something far more innovative.

Since the first spyshots and videos of the new Cadillac ATS were captured, many of them have offered a look at the new ATS tearing it up on the famous Nürburgring race course in Germany. You can expect that if Cadillac wants the ATS to compete with the likes of the BMW 3 Series, the new midsized Caddy sport sedan will need to be able to keep up in a similar performance setting and what better test setting than one of the most famous tracks in the world? The Nürburgring has become the benchmark for high performance vehicles and there is no secret that BMW spends plenty of time testing and tuning on “The Ring”. We know that the ATS has spent plenty of time on the Nürburgring but could the garage shown in this image be on the grounds of the famed German race course? Sure, that might be a little outlandish but in the world of sport-minded vehicles, it is all about getting the consumers attention and what better way to get the attention of the American consumer than to introduce the new Cadillac ATS in a garage then roll it out onto the Nürburgring to show the effects of all of that track-time testing? What if GM went so far as to have another car on that race course…something like the current BMW 3 Series…while the ATS was ripping around the track?

Again, there is a much better chance that the new Cadillac ATS is just parked in a garage in the Metro Detroit area but if that was the case – why not just unveil it online at the Detroit Auto Show? This writer cannot think of many ways that GM could make a bigger marketing splash than to introduce the new ATS by showing off its performance capabilities on a massive stage but that could just be the romantic in me dreaming. We will find out Sunday night at 7:30pm.

Bookmark this article and come back Sunday night at 7:30pm Eastern Standard Time to watch the debut of the Cadillac ATS right here on TorqueNews.com!