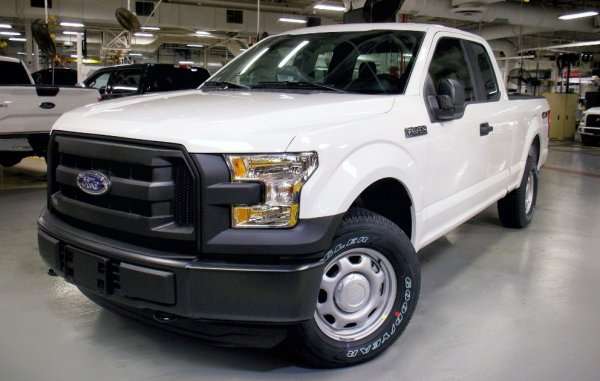 Back in May, we reported that the 2016 Ford F150 would come with a new compressed natural gas prep kit and production of these specially equipped V8 F150s began this week at the Kansas City plant – making the F150 the only half-ton truck sold in America with this alternative fuel system option.
Advertisement

While Ford Motor Company offered the compressed natural gas (CNG) prep kit back in 2014, only the Super Duty and Transit Connect have offered this alternative fuel system in the past year. The steady decline in gasoline pricing has made the low cost of CNG less of an incentive to some prospective buyers, but there is still a thriving market for CNG vehicles in the US.

“It’s exciting to see the first F-150s with the CNG/propane-prepped 5.0-liter V8 headed to customers,” said Jon Coleman, Ford fleet sustainability and technology manager. “Whether running on gasoline, gaseous fuel or both, the 5.0-liter V8 F-150 offers hardworking customers terrific towing and payload and now, the ability to operate on alternative fuel.”

The 2016 Ford F150 CNG package only adds $315 and it focuses on the engine internals, adding stronger valves, stronger valve seats, unique pistons and stronger piston rings – all of which allow these V8 pickups to run safely and reliably on gasoline, compressed natural gas or propane. Once the owner takes delivery, he or she will have to provide the actual hardware of the CNG or propane fuel systems, including the storage tanks, the fuel lines and the injectors – all of which can cost anywhere from $7,000 to $10,000 depending on the size of the tanks chosen.

Who is Buying CNG Vehicles?
When gasoline prices were in the $4 range, the low cost of compressed natural gas made these types of vehicles very popular, but the drop in gas prices has narrowed that advantage a great deal. CNG is still a bit cheaper than regular unleaded gasoline, but when considering the cost of upfitting the 2016 F150 with the CNG tanks and lines, the added expense eats up all of the cost benefits at the pump. However, there are still prospective F150 owners who want to invest less in foreign oil or who want to do their part to clean up the environment – or both. An engine running on compressed natural gas has almost no harmful tailpipe emissions compared to when running on gasoline, so these trucks have the potential to be far less harmful to Mother Nature. Also, some 85% of natural gas sold in the US is produced in the US, so CNG is far more of a sustainable domestic product than it gasoline.

So, if you have been waiting for a hard-working Ford F150 with a 5.0L V8 that will run on compressed natural gas, the time has come to make a trip to your local Ford dealership to place your order.