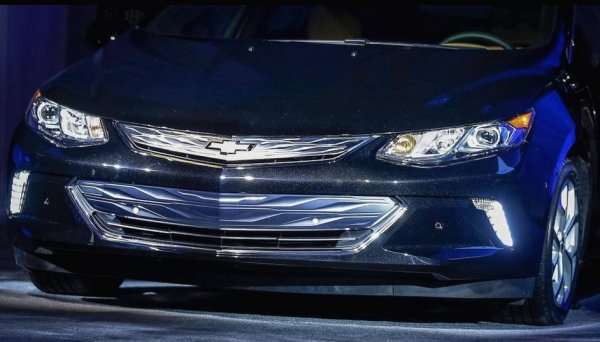 When the 2015 North American International Auto Show opens next week, General Motors will show off a balance of efficiency and performance, with Chevrolet showing off the new Volt while Cadillac rolls out the next generation CTS-V.
Advertisement

While General Motors might pull out some surprises for the 2015 NAIAS in Detroit, it looks like their two big debuts will come from the opposite ends of the spectrum, with the next generation Chevrolet Volt debuting across the room from the next generation Cadillac CTS-V. A compact extended range electric vehicle and a 640 horsepower super sedan; allowing GM to show off their versatility at the Detroit Auto Show with two new models that will likely be at the top of their respective segments.

The 2016 Chevrolet Volt
The 2016 Chevrolet Volt was slightly shown off this week at the Consumer Electronics Show (CES), but only the front end of the car was uncovered and no real information was introduced. GM told us a bunch of things that we already knew, like the facts that the next generation Volt will be quicker, it will have a new 1.5L gasoline range extending engine for better fuel economy and it will have a larger battery thus more electric range.

In addition to the new exterior design, the next generation Chevy Volt should help spur sales was improvements across the board and this new model will debut next week in Detroit.

The 2016 Cadillac CTS-V
General Motors has already shown off the 2016 Cadillac CTS-V online in images and videos, but the 2015 North American International Auto Show will give us our first chance to see the new super-Caddy in the flesh. Packing the same LT4 engine and 8-speed automatic transmission as the 2015 Corvette Z06, this new luxury super sedan packs 640 horsepower – making it one of the most powerful sedans in the world. The Detroit debut of the new CTS-V should bring out any details that haven’t already been announced – if there is anything big left to announce.

No Camaro in Detroit
Unfortunately, there seems to be a good chance that the next generation Camaro will not debut next week. A few months back, it had become a hot rumor that GM would spoil Ford’s big performance announcements by rolling out the next generation Camaro, but with not a single word from GM pertaining to the new muscle car, I suspect that we will not see the 6th gen Camaro in the Motor City.

There is a chance that GM could roll out the new Camaro with absolutely no fanfare, but do you really think that they would pass up all of the pre-release marketing opportunities? Neither do I.