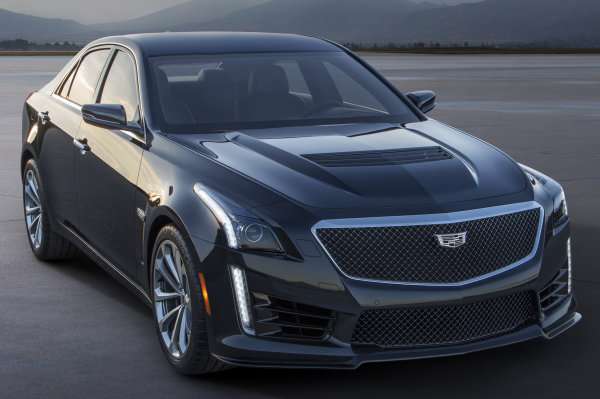 General Motors has pulled the sheets off of the 2016 Cadillac CTS-V and, not surprisingly, this new American super-sedan uses the same supercharged V8 as the 2015 Corvette Z06 to pack big power – big enough to take aim at the 707 horsepower Dodge Charger SRT Hellcat.
Advertisement

While General Motors has offered some other spicy sedans like the Chevrolet SS and the Pontiac G8 before it, the Cadillac CTS-V has been the big dog 4-door from GM. Since it first hit the street in 2004, the CTS-V has been one of the baddest big sedans sold in America and it has achieved that title with help from a Corvette engine. As expected, the 2016 Cadillac CTS-V is packing Corvette power and there is a good chance that it will still be one of the baddest sedans on the road when it arrives sometime next year.

Introducing the New CTS-V
While the 2016 Cadillac CTS-V will make its grand formal debut next month at the 2015 North American International Auto Show, General Motors announced all of the most important details on the new luxury performance sedan.

The heart of the 2016 Cadillac CTS-V is the same LT4 V8 that motivates the 2015 Chevrolet Corvette Z06, although the Caddy gets a few less official ponies than the new Z06. In Cadillac form, the supercharged LT4 makes 640 horsepower and 630lb-ft of torque, which is channeled to the rear wheels by means of the same lightning quick 8-speed automatic transmission that is offered in the new Z06 (there is no manual transmission option). This drivetrain allows the 2016 CTS-V to dash from 0 to 60 miles per hour in 3.7 seconds while reaching a top speed of 200 miles per hour. These figures make the new CTS-V the most powerful, the quickest and the fastest 4-door sedan from General Motors while also being one of the best-performing 4-door cars sold in the world.

As was the case with the previous generations of the Cadillac CTS-V, this new model is more than just a dyno and straight line monster. To make sure that this new Caddy handles the road course as well as it handles the drag strip, the CTS chassis is 25% stiffer than the previous model and the newest version of the GM Magnetic Ride Control system is promised to react to the conditions 40% quicker than before. There is also a massive braking package from Brembo, lightweight 19 inch wheels and Michelin Pilot Super Sport tires. Considering that the previous generation CTS-V was one of the best-handling sedans in the world, the improvements made to both the whole CTS lineup and the new V Series package should go a long way in making sure that this CTS-V is a beast that will hang with the best on any track.

Finally, General Motors designed the exterior of the new CTS-V to be both stylishly aggressive and aerodynamically functional. This includes a low reaching front splitter, a carbon fiber hood, a prominent rear diffuser and a low profile rear spoiler. Of course, there are also some unique V Series badges around the outside, a set of vents on the rear of the front fenders that are unique to the CTS-V package and a loaded up interior that will feature all of the high end bells and buzzers – including the Performance Data Recorder that also debuted on the Corvette.

Coming to Dealers This Summer
General Motors hasn’t announced the pricing for the 2016 Cadillac CTS-V, but they have announced that it will debut next month in Detroit before arriving at dealerships “late summer” of 2015. When it arrives, General Motors will look to spoil track days for Mercedes Benz, Audi, Jaguar, Aston Martin and BMW owners around the USA – although the main comparison will surely come down to the new CTS-V and the 707 horsepower Dodge Charger SRT Hellcat. The big Dodge has the power and top speed advantage, but they Caddy could prove to be the fastest American super sedan on a road course.

I am prepared to see a great many head to head comparisons between the Charger and the new Cadillac, so stay tuned for plenty of that over the next year or so.

Click any thumbnail above for a closer look at the 2016 CTS-V.