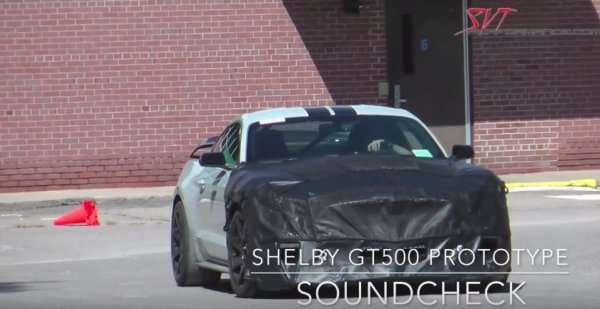 A video has surfaced showing a mysteriously camouflaged Ford Mustang rolling around the Metro Detroit area and while this car might look like a new Shelby GT350, it doesn’t sound like that road racing beast – leading me (and many others) to believe that this could be the big power Mustang designed to go to battle with the likes of the Dodge Challenger SRT Hellcat and the Chevrolet Camaro ZL1.
Advertisement

While GM and Dodge opted for big power monsters, Ford Motor Company took a different approach with their premium performance car, creating the road-handling Shelby GT350 Mustang rather than an all-out, high powered beast. However, even before the Shelby GT350 was introduced, there have been rumors that the Motor Company was still working on a modern GT500 and in the video below – we might just be getting our first chance to see and hear the highest-powered Mustang in action.

The Mysterious Shelby Mustang
On first glance, the car in the video below could easily be a Ford Shelby GT350R Mustang with some camouflage that hadn’t been removed after the car was formally introduced to the public. This car has the GT350R carbon fiber wheels, the GT350 floating rotor brake setup and the GT350R rear spoiler, along with quad exhaust tips which look like those featured on the GT350 and GT350R.

The heavy camouflage leaves plenty to the imagination, but this Mustang appears to be a slightly larger bulge to the hood than the GT350 model – possibly to make room for a supercharger or the piping of the long-rumored twin turbo setup. It also appears as though the front fascia may have larger vents behind the camo, which would also allow for better air flow to the engine or a set of intercoolers.

The most significant difference between the Shelby GT350R and the Ford Mustang test mule shown in the video below is the sound. Even though this Mustang test car has an exhaust system that looks like the quad tip setup on the GT350’s flat plane V8, the soundbites of this video do not sound like the GT350 flat plane. The GT350 has a higher pitched tone and is much quicker revving, whereas this car has a deeper tone and it just doesn’t have the distinct sound of the 5.2L flat plane V8.

The bad news is that we also cannot hear any signs of a supercharger or turbocharger setup, although this Mustang is only moving around at lower speeds. The GT500 – or whatever Ford calls the Mustang built to battle the Hellcat Challenger and the Camaro ZL1 – will almost certainly rely on forced induction to offer somewhere north of 700 horsepower. It could be a case where this driver of this Mustang was keeping the engine at low engine RPM levels so that we couldn’t hear the forced induction setup in action, but in any case – this car doesn’t sound like a GT350.

Now, there is a chance that this is just a leftover Shelby GT350R test mule running around with a new exhaust system or something, but the odds are better that this is some more extreme version of the new Shelby Mustang.

Check out the video below from SVTPerfomance and tell us in the comments below what you think this mysterious Ford Mustang could be.