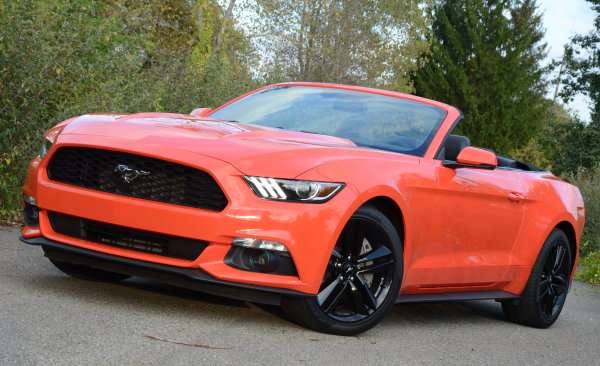 January 2016 sales figures are in for the Ford Mustang, Chevrolet Camaro and Dodge Challenger and this is one of those months that you should file under “T”, for Things that we didn’t expect – as the Mustang has once again dominated sales with the Camaro spike still unseen.
Advertisement

So, the Ford Mustang was by far the bestselling muscle car in America for 2015, winning every month of the year over the Chevrolet Camaro and the Dodge Challenger. However, with the new generation Camaro arriving late last year, we all know that it is only a matter of time before the Camaro sales spike as people line up for the 2016 models. Unfortunately for GM, that spike still hasn’t come as Camaro sales remain inexplicably slow – so slow that the Dodge Challenger was within 500 units of catching the Camaro with two generations on sale right now.

January Sales
In January 2016, Ford sold 7,580 examples of the Mustang, making it the bestselling muscle car for the 15th straight month. This is a healthy drop from the 8,694 sold in January 2015, but that was amidst the early rush for the new models and demand has cooled a bit. However, Mustang numbers for the first month of 2016 were still more than double the figures from January 2012, 2013 or 2014.

The Chevrolet Camaro was a distant second once again, with only 5,551 units sold last month. This is an improvement of 560 units, but with the 2016 models on sale for a few months, I expected to see stronger numbers from the Camaro in January.

Finally, the Dodge Challenger was once again the 3rd bestselling muscle car, but with 5,085 units sold last month, it was the best January ever for the modern Mopar muscle car. Even with the huge push for the Hellcat models early last year, 2016 has started off better than any prior year for the Challenger.

A Tale of Two Launches
The arrival of the “new generation: muscle cars - specifically the 2015 Ford Mustang and the 2016 Chevrolet Camaro - came a year apart, but they are very similar in their basic rollout. The 2015 Mustang began hitting dealerships in November of 2014 and the 2016 Camaro began hitting dealerships in November 2015. It should be noted that deliveries of both vehicles began in October of the year in question, but full scale deliveries didn’t begin for either car until November of their respective year. In both cases, there was a solid stock of “old generation” cars still on hand and as dealers discount those models to get them off of the lots, the previous generation Mustang and Camaro would generally add to the already strong sales numbers of the new generation.

The problem for General Motors is that Camaro sales haven’t followed the same patterns as Mustang sales, even though the timing of the rollout was similar for both vehicles. When the Mustang hit the lots late in 2014, sales exploded, making November and December two of the strongest months of the year. When the 2016 Camaro arrived late in 2015, Camaro sales were at some of their lowest levels of the year.

I then expected to see a huge boom in Camaro sales in January – similar to the strong numbers posted by the new Mustang one year earlier – but once again, Camaro numbers remained low. Chevy only sold around 600 more Camaros this January than they did last January when the new models weren’t available. For comparison, in the first January where the new Mustang was offered, Ford sold more than twice as many Mustangs as they had the year before.

So, where is the boom in Camaro sales? I am stunned that we still haven’t seen the big spike, as the 2016 Camaro has been well received by the media and the consumer market, yet numbers remain low. While we did see some harsh winter in January, it hasn’t been a particularly rough winter and it is definitely no worse than last year’s winter when Ford was posting huge Mustang sales.

Again, I look to February as the month when the 2016 Camaro will finally have its big impact on the segment sales sheet. In the meantime, sales numbers continue to be fairly strong for the Ford Mustang and the Dodge Challenger as gas prices remain low.