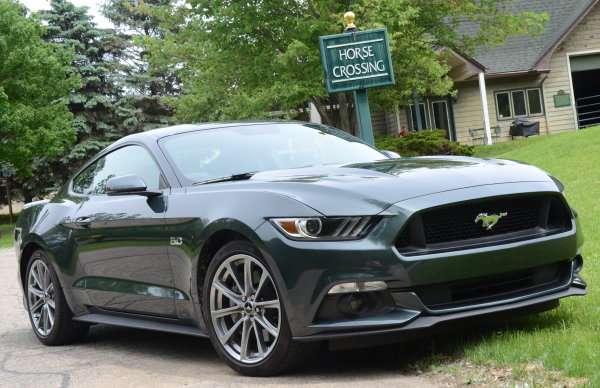 The Ford Mustang continued the streak of beating the Chevrolet Camaro and Dodge Challenger for an 11th straight month, dating back to November 2014 and helping the Mustang to extend its massive lead in the 2015 muscle car sales race.
Advertisement

The Chevrolet Camaro has dominated the muscle car segment sales race over the past five years, but the Ford Mustang was able to break up the full-year shutouts by the Camaro, claiming a month here and there while failing to beat the Chevy come December 31st. However, the massive success of the 2015 Ford Mustang coupled with slow sales of the Chevrolet Camaro has allowed the Mustang to take every monthly title this year, with September continuing the streak that started back in November of 2014.

Ford Crushes the Competition in September
In September 2015, Ford Motor Company sold 9,456 examples of the mighty Mustang. This accounted for a small drop from August, but this was enough units to comfortably beat the Chevrolet Camaro and the Dodge Challenger. In fact, had Ford sold a couple hundred more Mustangs last month, they would have outsold the Challenger and the Camaro combined.

General Motors sold 5246 Chevrolet Camaro coupes and convertibles while Dodge sold 4,552 Challengers – both of which are big drops from the month before. For the Camaro, the dip in sales comes as no surprise, with prospective buyers waiting for either the next generation models to arrive or for the discounts on the current models when the 2016s arrive. However, the drop in Challenger sales comes as a bit of a surprise, but with the 2016 Hellcat models on the way, we can expect another big spike in Dodge muscle car sales when the next batch of 707hp beasts begin shipping.

The Annual Leads Continues to Grow
With its 9th monthly title in the 9 months of 2015, the Ford Mustang has built a gigantic lead in the annual sales race and at this point, even if Ford didn’t sell a single Mustang in the 4th quarter – they will win the muscle car sales race for 2015.

Ford has sold 96,225 Mustangs during the 2015 calendar year while GM has sold only 61,544 examples of the Chevrolet Camaro. The Camaro has only moved more than 10,000 units twice in the last five years and even if GM somehow sold 10,000 units in each of the next three months, the Camaro couldn’t catch the Mustang’s sales through September. In other words, the Ford Mustang is a lock to win the title this year and in doing so, the Mustang will post one of the best sales years for a muscle car since 2007. It doesn’t look like the 2015 Mustang will catch the 2007 Mustang sales total of 134k+, but Ford has already sold more Mustangs this year than Chevrolet has sold Camaros during the modern era (since returning in 2009).

The Dodge Challenger sits in its usual 3rd with 51,949 units sold through September, but Chrysler has already sold more Challengers this year than they have in any prior year of the modern era (since 2008).

Auto Motive wrote on October 3, 2015 - 7:28am Permalink
Come on give me a break. A newly designed Mustang against the older Camaro and Challenger???? When the 2016 Camaro starts to hit showrooms give it a few months to ring up huge sales. Then comes the ZL1 and Z28 both with the Z06 LT4 engine and bam....they will sell like the hellcat or better. The lighter smaller Camaro ZL1 with rumored 640 hp at 3600 lbs or less may even beat the hellcat in the 1/4...sale numbers will climb how far only time will tell us.
Eric wrote on January 6, 2016 - 8:48am Permalink
Doesn't matter how many the new Mustang sells, it still looks like a Hyundai Tiburon. It may looks like a sports car now, but it sure doesn't look like a muscle car anymore though. I had the 2007 and THAT was a mean looking Mustang. When they started to smooth out the lines too much I jumped to the Camaro although that too after 2 years I ditched in favor of a pickup.
Jeff wrote on March 5, 2016 - 12:06am Permalink
You couldn't be more wrong. You're all over the map. Comparing to a Hyundai that they don't even make anymore? Now you've switched to a pickup? Yikes. This is the best looks Mustang since the '66. Smooth flowing lines with subtle angular edges. I love the lower stance that makes it look like it's ready to pounce. The tail lights the angle forward...nice. From an engineering standpoint, a 2007 can't tough it inside or out.