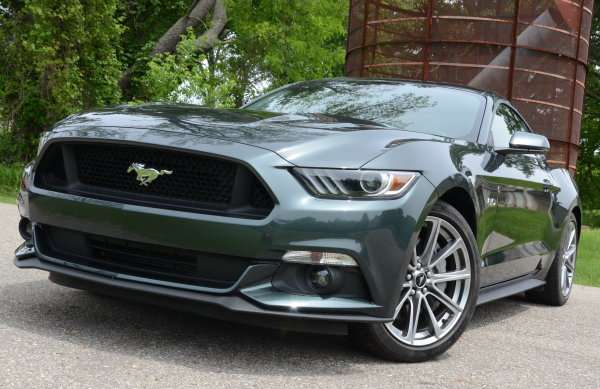 Following one of the worst sales months of 2015 in July, the Ford Mustang bounced back with strong sales in August and when combined with slumping Chevrolet Camaro sales – the Mustang built its lead in the annual muscle car sales race.
Advertisement

While I said above that Ford Mustang sales in July were one of the worst of the year, the mighty Mustang has still comfortably outsold the Chevrolet Camaro and the Dodge Challenger every month this year. In fact, the Mustang has been the bestselling sporty car in the USA every month since November 2014, so heading into August 2015, Ford had put together a streak of 9 straight monthly sales wins.

That didn’t change in August, with the Mustang sales climbing from the month before while Camaro sales continued to slide as consumers wait for the next generation to reach dealers later this year.

August 2015 Mustang Sales
In August 2015, Ford Motor Company delivered 9,997 examples of the 2015 Ford Mustang. This is an increase of more than 1,500 units compared to July 2015 while nearly doubling the number of Mustangs sold in August last year. 9,997 Mustangs sold last month allowed Ford to beat the Camaro by more than 3,700 units and the Dodge Challenger by more than 4,700 units.

On the year, Ford has sold 86,769 new Mustang fastbacks and convertibles – over 30,000 more units than the Chevrolet Camaro and nearly 40,000 more units than the Dodge Challenger in the same amount of time. More importantly, Ford has already sold more Mustangs in the first 8 months of 2015 than they did in all of 2014 – so the 2015 calendar year will most certainly be a major year for Ford mustang car sales.

Camaro Continues to Slide
As expected, sales of the Chevrolet Camaro continued to slide as consumers wait for the next generation to arrive later this year. The numbers of Camaros sold has dropped steadily each month since the 6th generation model was introduced, but with 6,236 GM muscle cars sold in August 2015, the Camaro still beat the Dodge Challenger in monthly sales. We can expect to see these numbers continue to drop as those folks who don’t love the 2016 Camaro rush to get the last of the available 5th generation models.

The 2016 Camaro is expected to begin reaching showrooms in the 4th quarter, so GM might be able to prevent the Mustang from winning every single monthly sales race for 2015 – but at this point, there is absolutely no way for the Camaro to catch the Mustang for the annual sales title. With a lead of more than 30,000 units, Ford could stop selling the Mustang today and the Camaro still might come up short by year’s end.

However, come 2016, we can expect this sales battle to get very interesting, as Chevy fans flock to buy the 6th gen Camaro.

Challenger is Steady, Not Slow
As is almost always the case, the Dodge Challenger is the 3rd bestselling muscle car in America and the 3rd bestselling sporty car in America, beating everyone except for the Ford Mustang and Chevrolet Camaro in August 2015 sales. Dodge sold 5,235 examples of the Challenger last month, which is up from July and better than August 2014, but still one of the lesser sales months of the year for the brawny Mopar muscle car.

Fortunately, with plenty more Hellcat models on the way for 2016, we can expect to see the Dodge Challenger continue with steady sales numbers over the next few months and into 2016.

James wrote on September 9, 2015 - 10:10am Permalink
Good for Ford and Chevy! Hopefully their increased sales in 2016 will sting all the greedy Dodge dealers out there who profited hand over fist from the restricted Hellcat production. I think they likely lost a lot of customers for good this year with their shady dealings.
jay breddkins wrote on September 10, 2015 - 3:15pm Permalink
All three companies can go to you know where as far as I'm concerned. They offer NO really great deals on any of the overpriced ponies. Chevy is sitting with tons of leftover Camaros and seem uninterested in any real programs. Can't combine zero financing with dollars off , and even then is a pathetic 1500 bucks. They can rot on the lot !
michael wrote on September 30, 2015 - 10:15am Permalink
People are willing to pay a little more for real performance unlike those cheaply built Jap cars that people like you drive. . Maybe you can set your sights on a 6 cyl version or the Challenger RT which can be had in the mid 30's. Otherwise put that coffee can muffler on your crappy car and cry. A real car ins't for you.
Pee Wee wrote on October 1, 2015 - 4:30pm Permalink
Amen....If it aint American muscle take your azz home.
Pee Wee wrote on October 1, 2015 - 4:28pm Permalink
No one wants a 2015 Camaro when the new styled 2016s are soon to be released.
Richard Dixon wrote on October 5, 2015 - 3:54pm Permalink
I did, because the 5th Gen is built in Canada and not Mexico..... and I also really like the 5th Gen. Because I paid cash, I got nearly $10,000 off my SS with RS performance package and recaros I doubt I would get a 6th Gen for anywhere near that price.