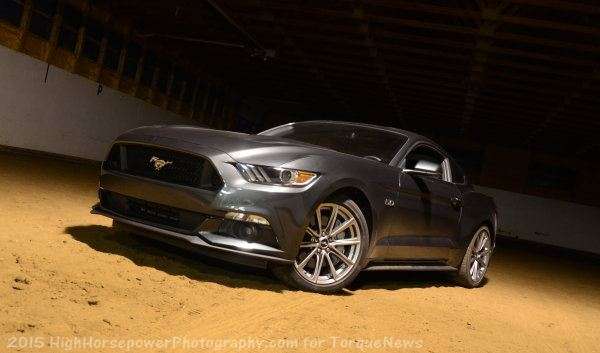 Mustang Makes it 9 Straight, Beats Camaro and Challenger in July

The Ford Mustang continued its domination of the American muscle car sales race into a 9th month in July 2015, once again beating the Chevrolet Camaro and Dodge Challenger in a month where all three muscle cars saw a decline in sales – allowing the Mustang to build a massive lead in the annual sales race.
Advertisement

Since Ford Motor Company began delivering the next generation 2015 Mustang late in the 2014 calendar year, the mighty Mustang has dominated the monthly sales charts. Coming into July 2015, the Mustang had outsold the Camaro by at least 2,000 units in every month since November 2014. During this successful run, the Mustang has beaten the Camaro by as many as 6,707 units in March and while the streak of monthly Mustang sales wins continued in July 2015, the margin between the two is as tight as it has been since the 2015 Mustang went on sale.

July 2015 Muscle Car Sales
Muscle car sales were down across all three of the competitors in July 2015, but based on the past few years, the July sales drop is very common for the Camaro, Mustang and Challenger. For the Mustang, July 2015 was the 2nd worst sales month since the 2015 models hit dealerships with “only”8,482 units sold. For the Challenger, July was the 2nd worst sales month of the 2015 calendar year, although the 5,151 Mopar muscle cars sold would have led to a near record month before February 2015.

Camaro sales were down from June, but July was actually one of the better months for the Chevy muscle car with 7,469 units sold. That surge in sales allowed the Camaro to narrow the gap, but the Mustang still handily led the segment in sales last month.

The Mustang’s Annual Lead Grows
While the Ford Mustang has led the muscle car segment sales race for 9 months straight, only the past 7 matter for the 2015 muscle car sales title. Fortunately, the sound beatings handed out by the Mustang in March and April – when the Mustang moved 6,200+ more units than the Camaro – have allowed Ford to take a massive lead in the annual race that is practically insurmountable.

Through the first 7 months of 2015, the Ford Mustang has moved 76,772 units while the Chevrolet Camaro has sent out just 50,062 new models. That means that the Mustang has a lead of 26,710 units and even if the Mustang should trail the Camaro in the last 5 months of the year, the Chevy would have to really crush the Mustang every month to catch up – and we all know that isn’t going to happen.

Possible Projections
Based on the first seven months, the Camaro is on pace right now to move around 85,000 units this year, although that number does not reflect the arrival of the 6th gen models. Late this year, we can expect to see a spike in Camaro sales numbers as dealers move to rid themselves of 2015 models while also dealing with the early rush for 2016 models.

The Ford Mustang is on pace to move over 131,000 new Mustangs this year, although that number does not reflect the sort of “cooling effect” as those people rushing to get a 2015 model have all been taken care of. Then again, we know that the 2015 and 2016 Shelby models are right around the corner, and those should lead to another Mustang sales spike. In any case, Ford will almost certainly sell more than 100,000 Mustangs during 2015.

The Dodge Challenger, as always, will finish third in 2015 muscle car sales, but the company doesn’t care about ranking. What the Chrysler Group management does care about is the fact that the brawny Dodge muscle car is well on pace to set a personal sales record. Right now, Dodge has sold 42,162 Challengers through the first 7 months. They sold around 51,000 Challengers in 2013 and 2014 while selling only 43,000 in 2012 – so the 2015 Challenger refresh has certainly paid off with a big sales increase. Right now. The Challenger is on pace for around 73,000 units and with the steady sales numbers, that expectation might be the most accurate come year’s end.

Don wrote on August 6, 2015 - 4:11pm Permalink
What's surprising is that Camaro sales are as good as they are considering the all-new and improved 2016 model will be at the dealership in about 3 months. It should be a very big seller for GM.