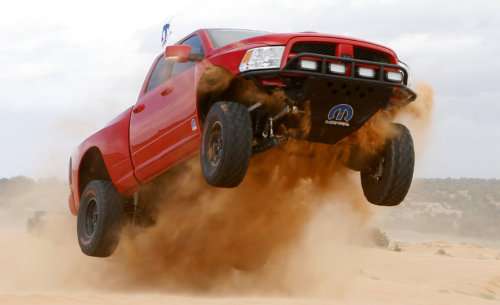 The folks at PickupTrucks.com recently took a production Ford SVT Raptor F150 and a Ram 1500 fitted with the Mopar Ram Runner package to a state park in southeastern California for the ultimate off-road head to head challenge dubbed the Duel in the Desert and when the dust settled – the Mopar Ram Runner proved itself as the better off-road truck.
Advertisement

PickupTrucks.com took the Ram Runner and the SVT Raptor to the Ocotillo Wells State Vehicular Recreation Area (SVRA) in California, bringing along veteran SCORE International Off-Road Racing Series Trophy Truck racer Chad Ragland. The team put together a 4.73 mile course that took the two trucks through a brutal off-road layout that featured everything from ruts and jumps of various sizes to some higher speed areas, with Ragland tearing through the desert terrain while being timed. In the end, the Ram 1500 turned Mopar Ram Runner claimed the title at the Duel in the Desert with a time of 6 minutes and 25 seconds – 33 seconds better than the time turned in by the SVT Raptor F150.

The Mopar Ram Runner was at its best in the worst conditions, with the modified Ram 1500 besting the Raptor by 10 seconds in the first stage which was named “Ruts and Jumps” while beating the Raptor by an impressive 24.8 seconds in the final stage named “Final Bumps”. On the other hand, the Ford SVT Raptor F150 was the better truck in areas that required more handling capacities and all-out speed (although not by very much), with the Raptor beating the Ram Runner in the second stage named “From Road to Wash” by just one tenth of a second and besting the Ram in the third stage named “River Wash Run” by 1.6 seconds. Each truck was taken through the course four times and Ragland turned in his best times of the day in both trucks during the final lap – with the Ram Runner turning in a best lap that was 33 seconds faster than the Raptor’s best lap.

It should be noted that while the Mopar Ram Runner Ram 1500 beat the Ford SVT Raptor F150, the Raptor is a truck that the average consumer can walk into a dealership, right now, and purchase. The Ram Runner, however, is only available as a modification package that is designed to be added to the 2009-2011 Ram 1500. The SVT Raptor used in the Duel in the Desert was a SuperCab model with the 6.2L V8 and an automatic transmission, which carries an online price of $43,720. The Ram 1500 used in the comparison was a Quad Cab model fitted with the 5.7L Hemi V8 and an automatic transmission which, according to the Ram Trucks website, can be had for as little as $32,915 in the Express trim. This gives the Ram a substantial advantage in price but the truck used by PickupTrucks.com was fitted with $21,080 worth of Mopar-provided modifications to complete the Ram Runner package…and that doesn’t include the off-road tires and wheels. Not factoring in the additional cost of wheels and tires, the Ram Runner carries a price somewhere in the area of $53,995 and based on that, it should beat the SVT Raptor handily.

However, when you look at the list of modifications included in the complete Mopar Ram Runner package, there are a variety of items that you could remove without any drop in performance. Features like the Sport Performance Hood ($1,070) and the off-road tire carrier ($1,425) really don’t add any additional capabilities to removing them from the package wont negatively impact the Ram Runner’s performance when off-roading and it can be debated whether or not the cat-back exhaust system ($1,175) is really needed as well. Remove those three items and the final Ram Runner price drops to $50,325. The majority of the remaining package price is the $13,670 MSRP of the Pre-Runner Stage II Lift Kit that adds a massive suspension overhaul that is really the reason why the Ram Runner is so capable. Other items like the off-road front fenders, the off-road bedsides and the race-styled front bumper allow the Ram Runner more clearance all around while also giving the tires room to move without hitting the body. We should also point out that for anyone who already has a 2009, 2010 or 2011 Ram 1500 Quad Cab with the Hemi V8, being able to beat a Raptor in some of the roughest conditions are only a Mopar Performance Part catalog away and, unlike the Raptor, the Ram Runner package can be pieced together to allow for more customization by the owner.

Cost aside, the Ram 1500 turned Mopar Ram Runner has gone head to head with the Ford SVT Raptor F150 and beat it handily – allowing the Chrysler Group to claim the title of offering the best off-road truck on the market today.

Check out the video below courtesy of PickupTrucks.com for a closer look at the Duel in the Desert including both trucks in action!

chartguy wrote on May 31, 2012 - 2:33pm Permalink
In your comparison of price, you ignore the labor involved in swapping all those parts and the cost of wheels and tires. Most people do not plan on finishing the assembly of their new vehicle when they buy it. It's funny that PickupTrucks.com picked the Ram, when the professional off-road racer, Ragland, picked the Raptor. He talked about how integrated the package was, with the software that helps the Raptor do so well. If I wanted the bigger shocks on the Ram, I'd buy the SVT and buy the Raptor Performance Group Stage IV package. Then I'd still have the fantastic Raptor seats and the integrated design. I actually own a Dodge ¾-ton 4WD and two Ford ¾-ton 4WD pickups, so it is not brand loyalty. The RamRunner is built more for rock-crawling. The Raptor is built for hustling down washboard dirt roads. Different tools for different jobs.
Anonymous wrote on June 1, 2012 - 12:02am Permalink
"svt raptor and 'fitted RAM 1500"...wtf...go scratch. Call me when you show up w/ a valid comparison. Then i'd be honored to read about a competitor. All you did was make me realize how inadequate your 'news' organization is. One must learn to pick your battles...and this was fundamentally the wrong one. You've lost a reader.
Anythingbutadodge wrote on June 2, 2012 - 9:53am Permalink
Too bad you fail to also mention that the Raptor is an off road truck with factory parts where as Dodge is too scared to manufacture their own off road parts because they know they suck and it will break. Put the same type of parts on an F150 and I bet the results would be a lot different.
Anonymous wrote on January 5, 2013 - 5:00pm Permalink
I recently bought a White 2012 Ram 1500 Sport and installed the entire Ram Runner Kit by myself. I live near Edmonton, AB and work as a welder, so cutting and welding shock mounts were easy and are perfectly done, it took 60 hrs and i saved a shit load of cash in the process. I ended up spending the extra on a set of custom beadlock Method Race Wheels in BJ Baldwin Green with Goodyear Duratraks. The truck is truly amazing on highway and at the same time you can hang a sharp left into a ditch @70mph to pass a slow moving Ford Raptor.... haha good times!
Anonymous wrote on February 15, 2013 - 8:38am Permalink
Have you tried to tow anything with your RR? Put anything significantly heavy in the bed? I am considering the kit on my 2012 but don't want to lose any functionality.
Steve Graves wrote on October 30, 2015 - 9:04pm Permalink
This is to the people who didnt thank this review was fair. Your right. It was'nt. The Dodge has an aftermarket suspension lift. Fords is factory. So I give it to ford. Ford 6.2L Supercharged V8 411HP sounds great but what about a Normaly asperated 5.7L 395HP Hemi. Now that's impressive. Less cubic inches and only giving up 16HP. That's awsome!!! Guess Dodge should put the 6.2L Supercharged Hemi in this Ram Runner. Its Only got 707HP. Oh yeah and that's from Dodge. Not aftermarket!!! Does this sound fair enough. I thank so. Both motor's are 6.2L both are supercharged. What's not fair about that? I have a 2015 Ram1500 Quad 4x4 and am all ready saving for the 6.2L Hellcat motor for my truck. I can all ready out run the Ford Raptor thanks to the 3.92 Gears and the 8spd auto. So I can't wait to add the 6.2L Hemi with the supercharger. You know so the Raptor vs Ramrunner would be more fair.