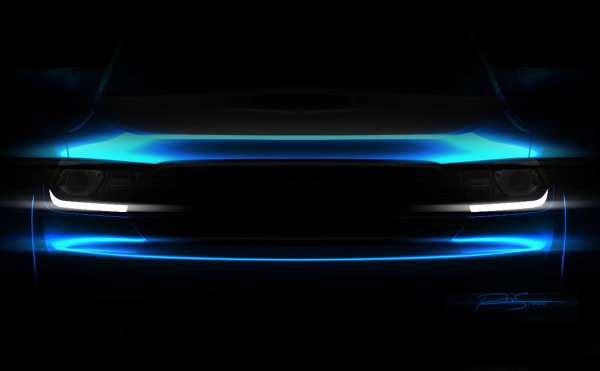 Mopar is Bringing a Dodge Durango to SEMA

The blurred sketch of a Dodge Durango was released with this year’s FCA SEMA teasers and with the image traveling around the social networks without any supporting information – we bring you a closer look at this blue SUV and what it could be.
Advertisement

Yesterday morning, FCA rolled out a collection of teaser images showing some of the Dodge, Ram, Jeep and Chrysler vehicles headed to the 2016 SEMA Show next week – including the Dodge Challenger Shaker which we discussed yesterday. Another image in that group was the one shown above, but when the accompanying details are removed, this artwork left a great many people on Facebook guessing as to what it was.

On the FCA media site, this image comes with the following explanation:
A teaser sketch of a Dodge Durango concept modified with Mopar production and concept products, one of many customized rides the Mopar brand will showcase in its display at the 2016 Specialty Equipment Market Association (SEMA) Show in Las Vegas.

So, they really don’t tell us anything about this Durango, but it does confirm that this is a sporty Dodge SUV. Furthermore, unlike the Challenger Shaker image, this darkened image doesn’t reveal much about the vehicle, other than the fact that it is a Dodge Durango…although even that wasn’t clear to many people.

However, when the teaser image of the bright blue Dodge Durango is lightened up, it appears as though it might have something on the hood – either a hood scoop of some sort or a raised center portion of the hood. Again, this is just a rendering of the vehicle so it is hard to say actually what is going on with the hood, but that is the only really unique feature which jumps out of the dark image.

So, we know that there will be a Dodge Durango with some sort of unique hood finish on display at the 2016 SEMA Show and with that big convention set to open next week – it will only be a few days until we get the full details on this mysterious SUV and the Dodge Challenger Shaker that we showed you yesterday.

Click here for a closer look at the Challenger Shaker teaser if you missed that!