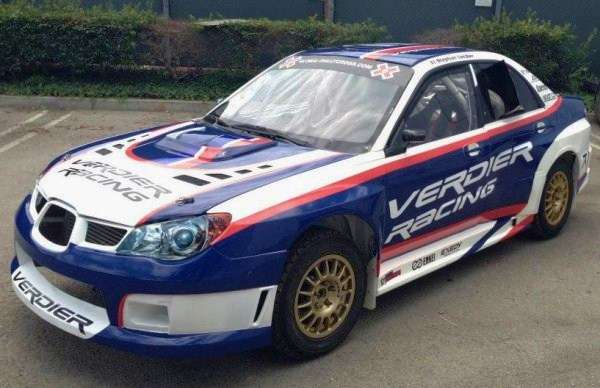 Rhys Millen and Stephan Verdier had the rug ripped out from under their Global RallyCross careers last season when Hyundai announced that they were pulling out of all North American motorsports but both drivers will make their GRC return this weekend at the LA X Games – with Verdier driving a privately owned and sponsored Subaru WRX while Millen will bring out the same Hyundai Veloster race cars that he used in 2012.
Advertisement

While Stephan Verdier didn’t win a race during the 2012 Global RallyCross season in his Rhys Millen Hyundai Veloster rally car, he was one of the drivers in the hunt in almost every event.  Verdier posted a season’s best 3rd place finish in Charlotte, a 5th in Las Vegas event #1 and a 6th in Texas en route to a 6th place finish in the championship standings.  Teammate Rhys Millen also had a strong season (finishing in a tie for 4th place in season points) and it seemed like the Veloster rally team was well on their way to being one of the brands to watch in the Global RallyCross – until Hyundai announced that they were pulling all factory backing from their North American motorsports projects.  This left both drivers looking for a ride and when the 2013 GRC season began earlier this year, both Millen and Verdier found themselves on the outside looking in without sponsored/factory backed rides.

It took Rhys Millen and Stephan Verdier longer than they had hoped but they’ve both found a ride for the 2013 Global RallyCross race at the Los Angeles X Games.  For Millen, he will head to LA with the same two Hyundai Veloster rally cars that he and Verdier used last season but this time, Rally America driver David Sterckx will be driving his second car rather than Verdier.  They might not have corporate backing from the Korean automaker but that shouldn’t make these cars any less competitive so Millen and Sterckx could both be contenders in LA.

On the other hand, Stephan Verdier found his ride for the LA X Games event in his own back yard.  Verdier will drive the same Subaru WRX that he drove to three podium finishes in the 2011 GRC championship when he was serving as both a driver and car owner.  Verdier and his team put a fresh livery on the outside that proudly displays the driver/owner’s name and he will make his 213 GRC debut this weekend in this Subaru.

In theory, Stephan Verdier will be at a disadvantage compared to the Subaru team drivers Bucky Lasek, Sverre Isachsen and Dave Mirra but when you look at the technical issues that have plagued the Subaru Puma RallyCross team drivers this year – it might not be a bad thing to have a Subaru that is not built and tuned by the struggling factory backed teams.  Verdier did much better than any of the Subaru team drivers in 2012 so with all things equal, the privately owned Subaru might stand a better chance of winning than Lasek, Mirra or Isachsen based on prior experience but we won’t know which Subaru is the best until the green flag drops this weekend.

In any case, the Global RallyCross field at the Los Angeles X Games is expected to be the biggest of the 2013 season so grabbing the final X Games RallyCross gold medal of 2013 won’t be easy for anyone.

The X Games Los Angeles RallyCross event is slated to run at 5:00pm on Sunday August 4th and you can catch the action on ESPN although the broadcast may share time with normal X Games events so your time watching the racing action will be mixed with a bunch of 14yo kids skateboarding and riding their bicycles.  Fortunately, Global RallyCross is awesome and more fortunately – you can always DVR the programming block and fast forward through the kiddie crap.