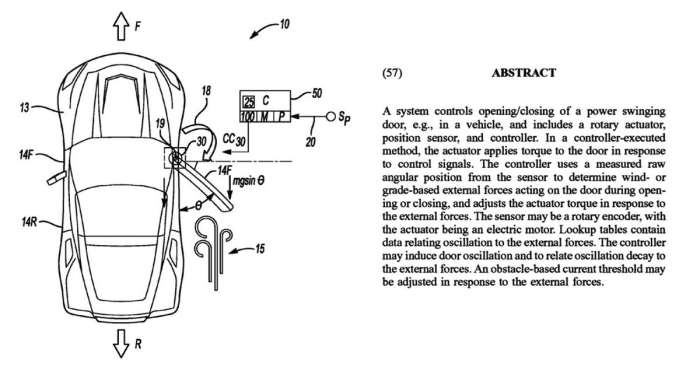 An image from a patent filing shows a C7 Chevrolet Corvette with high tech doors that open and close themselves, and while it seems too late in the current generation for this technology to arrive, it makes sense for the long-rumored mid-engine C8 to utilize this feature.
Advertisement

The image above was first shared to the enthusiast forum of MidEngineCorvette.com from the General Motors patent filing and in it, we see a detailed diagram that focuses on the passenger’s side door of a current Chevrolet Corvette. In that forum post, there is also a brief-yet-detailed description of how the “power swinging door” works in relation to dealing with vehicle angle, wind or objects in the path of the door, which we have also included in the image above.

Smart Power Doors
Based on the wordy details above, this power swinging door system would allow the doors of the Corvette to open and close without the driver or passenger from providing any force of their own. If GM integrates a remote aspect of the system, the driver could push a button on the key fob as he or she approaches the car and the door would automatically open for them and their passenger. Once seated, a push of an interior button would close the doors and if there is no remote feature, the exterior “door handles” could be something as simple as a button that you push to activate the power doors.

Imagine that you are walking up to your new C8 Corvette with a friend. As you near the car in the parking lot, you push a button on the fob that slowly opens both doors. You and the friend climb in, at which point you push a button on the center console that triggers both doors to close and latch. How cool is that? Very cool, of course, but there are some obstacles for this type of system.

What if the car is parked on a steep incline? What if there is strong wind? What if there isn’t enough room for the door to open without hitting something? This is where the verbiage on the right side of our image above comes into play, as it explains that the system will have sensors to measure force against the door, so if the car is parked at a sharp angle or if there is hard wind, the system can adjust the force of the door to open and close safely. Also, there will be sensors that monitor the area in the path of the doors, so if something is in that path, the system will prevent the door from opening into that object.

More Mid-Engine Technology
Although the image clearly shows a C7 Corvette, it seems highly unlikely that this technology would debut in the current generation, as it is widely expected that the next generation car with a mid-engine design is coming this year. However, it is not unusual for an automaker to use a current model strictly for display purposes, allowing the company to apply for the patent without revealing an upcoming vehicle. In other words, while we see a C7 here, if this feature comes to a production Corvette, it will almost surely be on the next generation model.

Not only does the timing make more sense for this new feature to come to the C8 Corvette rather than the C7, but if the rumors of the mid-engine Chevrolet sports car being more upscale prove to be true, a feature like self-opening doors goes a look way in adding a luxury feel. Also, with the mid-engine Corvette expected to have a slightly higher price than the current front-engine platform, adding more luxury features like this will help justify the higher price – just in case the performance measures don’t do it on their own.