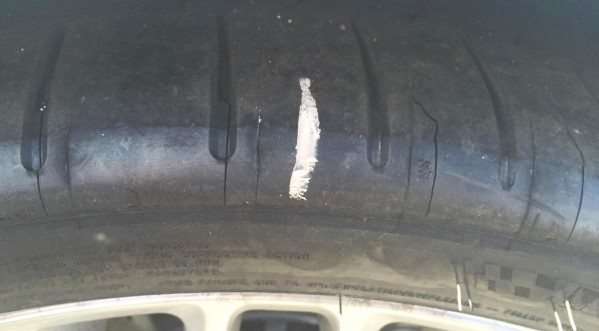 The 2015 Chevrolet Corvette Z06 comes in certain forms comes with high performance Michelin Pilot Super Sport Cup 2 tires that are intended strictly for summer use, but those owners who are receiving their super-Vettes during the cold months are finding that the tires are cracking very badly – and Michelin’s only advice is to not move the car in temperatures under 20 degrees.
Advertisement

Over the past few months, new owners have been taking delivery of the 2015 Chevrolet Corvette Z06 and while those folks up north are getting their new supercar with the knowledge that they will be tucking it away until the snow has cleared, there are some people in warmer climates who are getting to enjoy their new Corvette right away. At least, those folks thought that they would be getting to enjoy their new Z06 right away, until they found massive cracks where the sidewall of the Michelin Pilot Super Sport Cut 2 tires meets the soft, sticky tread.

Cracking Tires on the new Z06
Discussions have been popping up all over the internet with owners of the new Corvette Z06 complaining that they are finding a substantial number of very large cracks that run from the sidewall to the tread area of the Michelin Pilot Super Sport Cup 2 tires that are included in the new Z07 performance package. The image above was posted on CorvetteForum.com by member sdtoothdoc, who recently took delivery of his 650 horsepower Chevy in San Diego California. This same problem was referenced in the post by sdtoothdoc by an owner in Las Vegas with the same problems, and the dealerships involve claim that many other new Corvettes – including the “entry level” Stingray with the Z51 handling package and the same Michelin tires – are experiencing the crank issue.

The owners of these cars with the cracking tires have been led to believe that this is a tire manufacturing problem, so rather than complaining to General Motors or the local Chevrolet dealership, 2015 Corvette Z06 owners with the troublesome tires should be complaining to Michelin. However, Michelin insists that this problem isn’t their fault, as owners should know that they shouldn’t be driving their Corvette with summer performance tires in weather under 20 degrees Fahrenheit, or they are likely to encounter cracks on the sidewalls. Michelin went so far as to instruct owners not to move their Corvettes when equipped with these tires and if the vehicle cannot be stored in a heated garage, owners should consider removing the tires and bringing them into the house.

The problem is that in the case of sdtoothdoc’s Corvette Z06 with the cracking tires, is that he lives in Southern California, where the temperatures have not been anywhere near those danger zone temperatures. So, if the cold is causing the cracks, then how are people in San Diego, Las Vegas and other warm climates running into this problem?

We should keep in mind that all new Corvettes are built at GM’s plant in Bowling Green, Kentucky. It has been plenty cold in Kentucky this winter and there is a good chance that when these new Corvettes rolled off of the assembly line and out of the building, they spent at least some time moving around in temperatures well below 20 degrees. They are then loaded onto transport trailers and strapped down, also often in temperatures below 20 degrees. Based on this, Michelin would like to put the blame on General Motors, but in the meantime, the tire company is suggesting that owners of new Corvettes with cracked tires avoid driving the cars at all.

We are certain to hear more about this problem in the coming weeks, as either GM or Michelin will surely have to end up replacing the cracked tires on brand new cars. In the meantime, it seems that some of these owners are left with no real advice on what to do – shy of not driving the car on failing tires and if they do want to drive the car in the cold, they need to buy all-season tires.

John Goreham wrote on March 11, 2015 - 4:33pm Permalink
I see a Ford Explorer / Firestone Tire type circular firing squad scenario developing here. GM and Michelin better get together and start shipping some free tires fast.
Mark Day wrote on March 11, 2015 - 9:16pm Permalink
There is absurdity in the wheel and tire combinations of today's vehicles. GM puts mandatory summer tires on vehicles with mandatory heated seats. GM, of course, can do anything it wants – I just don't like being forced to pay for their incompetence through bailouts. Great concept – reward failure and punish success.
Jason wrote on March 12, 2015 - 4:21am Permalink
Check your facts. The 1LZ trim doesn't have heated seats. So, they aren't mandatory. Plus, it doesn't have to be freezing outside for heated seats to be desirable. They can be nice to have on long road trips to help keep your back muscles relaxed. Now, the most problems I'm aware of with the tires are with the Z07 Sport Cup 2 tires which will crack if driven in sub-freezing weather. The standard Super Sports shouldn't have that problem. I've run both Goodyear and Michelin summer tires on my C6 coupe in sub-20 F weather (and in snow when I've had no other options) and never developed any cracks. You just have to drive at a sane speed. So, there's nothing wrong with the wheel-tire combos. As for your bailout comment. GM is fine in my book as their quality is higher than Ford, which didn't accept a bailout, and GM will recall and fix problems with their vehicles. Unlike my experience with Ford's Shelby GT 500, many of which have had clutches catastrophically fail due to a faulty slave cylinder that Ford refuses to do a recall on. To top it off, they don't warranty clutches because they are considered "normal wear items". Sorry, but a clutch shouldn't completely die after 10k miles of non-intense driving. I'd much rather deal with GM who will at least recall and fix problems under warranty than have a car that I don't feel safe driving because it could catastrophically fail only to have the manufacturer tell me I'm SOL. Pfft, so much for the "pride" of owning a car from a non-bailout company.
Mark Day wrote on March 12, 2015 - 12:46pm Permalink
"Check your facts." - No where does my general comment specifically refer to the Z06 having both heated seats and summer tires. Also: "As for your bailout comment. GM is fine in my book as their quality is higher than Ford..." - Illogical.
John McConnaughy wrote on March 13, 2015 - 8:26am Permalink
You obviously haven't owned many GM, lower end cars, Malibu, etc. GM, won't fix squat on one of these even when they issue in house technical bulletins. My daughter has one and it ihas cost her a small fortune in repairs that they should have provided. Your experience is not the norm everywhere.
Mark Day wrote on March 13, 2015 - 1:36pm Permalink
I've owned mostly GM vehicles and have had the same negative experience with poor GM quality/reliability and GM's refusal to repair. In 2012 I bought a Toyota RAV4 and have had zero problems in two years of ownership. But GM was bailed out - paid for by all taxpayers – a big fleecing
Carl wrote on March 12, 2015 - 1:33am Permalink
This article is partly hogwash. My Z06 was delivered with cracked tires. GM replaced them promptly. No hassles at all....
Patrick Rall wrote on March 16, 2015 - 12:13am Permalink
It isnt "hog wash" at all, as several people are having the problem and they arent getting the service response that you did...and those are the people to whom I am referring in this piece.
Carl wrote on March 16, 2015 - 1:42am Permalink
Where are you getting your info on the people not getting their tires replaced. Is your source reliable. As I had zero problems do you think GM has different policies for different people. Seems unlikely to me. I hope your not reading forums and Petermj...