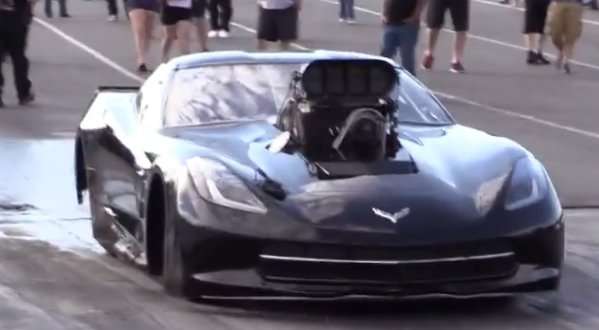 A video has surfaced online showing a super modified 2014 Chevrolet Corvette Stingray that is packing some 3,500 horsepower – making it what I believe to be the quickest and the meanest looking C7 in the world.
Advertisement

Unfortunately, the details on this 3,500hp 2014 Chevrolet Corvette Stingray are pretty limited, but I only need to know so much about a car to see that it is one wicked race car. The guy shooting the video spends some time asking the driver questions about his black C7 Stingray and the driver is somewhat hesitant to divulge too much information about this beast. However, based on what we can see in the video, we can make some guesses as to what is going on under the skin of this new Corvette coupe.

The 3,500hp Corvette Stingray
During the interview portion of this video, the driver explains that the started with a 2014 Chevrolet Corvette Stingray and did all of the work to convert it into a full blown outlaw drag car. I would have to imagine that the only original 2014 Corvette pieces on this car are found around the outside, as the interior, the drivetrain and the chassis are purpose built for the track.

Based on the output and the sound of this Corvette, I would guess that the massive supercharger is mounted to a fully built race engine rather than the new LT1 V8. Realistically, if someone had a 3,500 horsepower LT1, I’m sure that it would be all over the automotive media world, so I suspect that this 2014 Stingray has a much larger engine than any modern Corvette.

This 2014 Corvette is built to compete in the NHRA Outlaw 10.5 class, so it is required to run a 10.5 inch wide tire and weigh at least 3,000lbs, but with a 3,500 horsepower supercharged V8 – 3,000lbs makes for a lightning quick race car. Also, the drag spec suspension setup and massive rear tires makes this the nastiest looking Corvette I’ve seen…I just love the look of this car.

For those who are not familiar with 8th mile racing, a simple online 8th mile to quarter mile calculator suggests that the 4.11 would be a 6.61 quarter mile. The 4.82 would have a 7.69 and the 4.28 would convert to around 6.87 in the quarter. For comparison, Erica Enders won the Pro Stock Car class at the last NHRA event with a quarter mile time of 6.571, so this C7 Corvette is almost as quick as the top cars in the pro stock class.

This Corvette sounds incredible during the runs so crank up your speakers and enjoy!