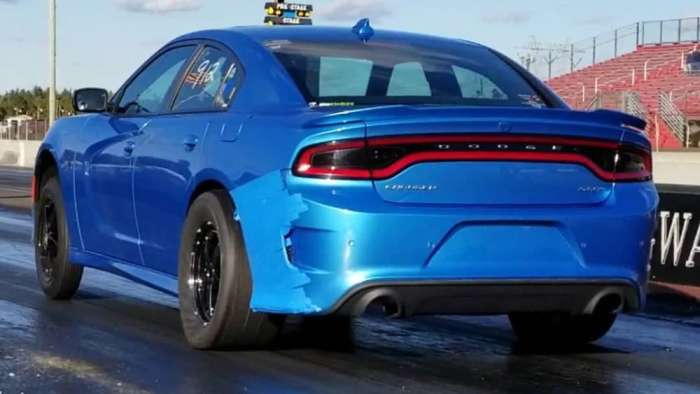 This past weekend, the B5 Blue Dodge Charger SRT Hellcat shown here ran a 9.04 at 154 miles per hour in the quarter mile during the final event of the 2018 Modern Street Hemi Shootout schedule – resetting the world record for the quickest Hellcat sedan.
Advertisement

The Omega Hellcat is a B5 Blue Dodge Charger SRT Hellcat owned and driven by father-and-son team Jose and Ruben (they would prefer that I not use their last name). This car has been running in the mid-9s for quite some time now, but this past weekend, they fitted up a nitrous setup that helped them go a whole lot quicker in the quarter mile.

With Jose at the wheel, this Hellcat Charger ran a 9.04 at 153 miles per hour during the final event of the 218 Modern Street Hemi Shootout season and in doing so, he set the new record for the quickest Hellcat Charger in the world – beating the previous record by more than three tenths of a second.

The Omega Hellcat
As you might expect, running 9.0s in the quarter mile with a Dodge Charger SRT Hellcat requires some upgrades, but the mod list is shorter than you might think.

The car was built by Mike at EMP New York, who added a 2.65-inch upper pulley, an ATI 10% lower pulley, ID1300 fuel injectors, a Fore 4L triple pump fuel system, a Nitrous Express plate kit set up with a 200 shot, a cat-less mid-pipe, a Driveshaft Shop one-piece driveshaft, a set of “1400 horsepower” axles from the Driveshaft Shop and an E85 tune from Curt at Injected Engineering. Of course, this Hellcat Charger also has a good set of tires, with 315/50/17 Mickey Thompson ET Street R drag radials helping put the power to the ground while skinny front wheels and tires help cut weight a bit.

So, this car has two new pulleys, a beefed-up fuel system, a nitrous setup, stronger driveline components, good tires and a good tune, but the engine, transmission, supercharger, suspension and brakes are all original. To be clear, that means that the supercharger hasn’t been ported, the camshaft and cylinder heads are original, the transmission internals are untouched, the suspension is stock and the brakes are the same huge Brembos that came from the factory.

For those wondering, in addition to the smaller rear wheels, the only weight reduction done to this Hellcat Charger was the removal of the passenger seat and rear seat while at the track, which likely cuts around 150 pounds from the car. With that in mind, it still weighed well over two tons when it set this record – nearly cracking into the 8-second range.

Best of all, Ruben tells me that this was their first outing with the nitrous setup, so there could be more left in this Hellcat Charger – meaning that 8s could be in their future. However, right now they have to “settle” for a 9.04 run making the Omega Charger the quickest Hellcat sedan in the world.