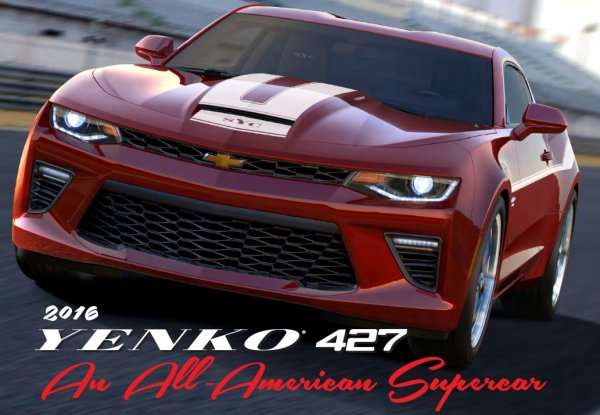 The Yenko Camaro is one of the best known special edition packages of the vintage muscle car era and New Jersey-based Specialty Vehicle Engineering has put together a new Yenko package for the 2016 Camaro – complete with a 427 cubic inch engine and the classic Yenko graphic package.
Advertisement

Back in 1967, 1968 and 1969, Yenko Chevrolet in Canonsburg, Pennsylvania secured their place in the muscle car history books when they offered up their specially prepared Yenko Camaro. Don Yenko’s dealership technicians took the standard Camaro engine out and swapped in a high performance 427 cubic inch big block V8 along with a list of other performance parts that made these Camaros among the best of their era.

Yenko Chevrolet is long gone, but the legend of their high performance Camaro package lives on in the classic collectible market. The continued interest and enthusiasm in the Yenko name has led the New Jersey-based GM performance shop Specially Vehicle Engineering (SVE) to build a modern Yenko package for the 2016 Camaro – and it is pretty impressive.

2016 Yenko 427 700HP Camaro
The 2016 Chevrolet Camaro SS comes with the LT1 V8 packing 455hp and 455lb-ft of torque. This engine makes the new Camaro significantly more powerful than the 1967-69 Yenko 427 Camaro, which had “only” 425 horsepower, so the team at SVE took a different approach to creating a modern Yenko Camaro that will handle out similar beatings as the classic Yenko Camaros built in Canonsburg.

First and foremost, the SVE team tears out the stock LT1 and replaces it with one worked to 427 cubic inches and fitted with all of the components needed to lay down 700 naturally aspirated horsepower. That is serious power from a naturally aspirated engine – particularly one based on a production engine. This high performance engine is topped by Yenko branded engine covers with the 427 badges.

Finally, the inside of the 2016 Yenko Camaro gets embroidered head rests, embroidered floor mats, Yenko door sill plates, a serialized dash plaque and a pair of Yenko-badged key fobs.

No pricing is available on the 2016 Yenko Camaro, but interested buyers can contact Specialty Vehicle Engineering for more information.

Dan Baker wrote on December 29, 2016 - 3:29pm Permalink
would like pricing and pictures and availibe litiy.

LG's New EV Battery Plant Is a Welcome News for Tesla
Tesla Giga Berlin's New Hurdle: It's Not Only the Gov't, but Now Tesla Itself
END_OF_DOCUMENT_TOKEN_TO_BE_REPLACED