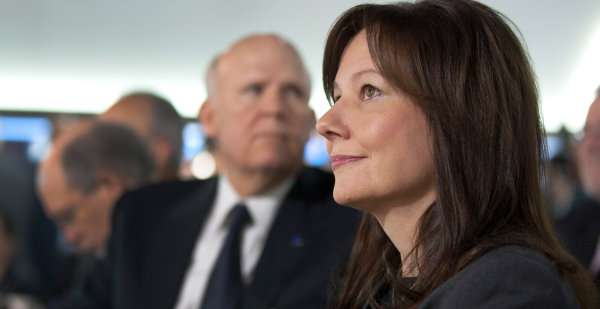 General Motors announced this morning that Chief Executive Officer Dan Akerson will step down from his position atop the company on January 15th 2014 and when he does Mary Barra will take his place as the CEO of GM – making her the most powerful woman in the history of the automobile industry.
Advertisement

When Mary Barra takes over as the Chief Executive Officer of General Motors on January 15th 2014, the world will meet the first ever female CEO of a major automaker and as she steps into Akerson’s position of CEO, everyone else at the massive automaker will answer to Barra. This will make Barra the most powerful woman in the history of the auto industry and realistically, as the head of one of the largest automakers in the world, Barra will be one of the most powerful people in the industry – male or female. I would go so far as to say that Barra will be the most powerful woman on Earth outside of the crooked world of politics. After all, Barra will be THE BOSS of one of the largest corporations in the world and that is something that few other women can say.

There are plenty other female CEOs of major corporations along with high ranking women in the political world but it can be argued that none of those companies have the global reach or the global financial impact of General Motors. Unlike women including Michelle Obama or Melissa Gates (wife of Bill Microsoft's Bill Gates), who are in their position mostly because of the accomplishments of their husbands – Barra has risen to this position of power based strictly on her own work. After all, had Barack Obama not been elected President of the United States of America…no one would know the name Michelle Obama. Also, while Forbes lists some other women CEOs as ranking higher in terms of power (before the announcement of Barra becoming CEO) including Indra Nooyi of PepsiCo, Virginia Romeety of IBM and Meg Whitman of Hewlett-Packaard, Mary Barra oversees a company that is better known on a global level than the other powerful women around the world…although some may dispute that Pepsi has a bigger reach as they sell cans of soda for a buck a piece.

Some quick background on Mary Barra. She is 51 years old and currently serves as the Executive Vice President of Global Product Development, Purchasing and Supply Chain. Barra has spent 33 years with General Motors in a various departments including of manufacturing, engineering, and senior management positions. Under her watch, GM has climbed out of the grasp of bankruptcty thanks to the improvement in quality control and improved customer satisfaction combined with the steady stream of attractive new models – all of which Barra has been involved with over the past 3 decades.

"With an amazing portfolio of cars and trucks and the strongest financial performance in our recent history, this is an exciting time at today's GM," said Barra. "I'm honored to lead the best team in the business and to keep our momentum at full speed."
While Mary Barra will assume Akerson’s role as the Chief Executive Officer, she will not take over his other position as the Chairman of the Board. That role will be filled by Tim Solso. Solso has been with GM as a member of the Board since 2012 after previously serving as the Chairman and CEO of Cummins Inc. Solso is 66 years old so if things go as well as are expected with Barra serving as the CEO – perhaps she will also fill Solso’s role in the near future.

Sadly, Dan Akerson’s decision to leave General Motors was not moved up to allow him more free time on the golf course. Akerson’s wife was recently diagnosed with an advanced stage of cancer and leaving his position with GM will allow more time to spend with his wife as she battles the illness. "I will leave with great satisfaction in what we have accomplished, great optimism over what is ahead and great pride that we are restoring General Motors as America's standard bearer in the global auto industry," Akerson said in a message to employees.

John Goreham wrote on December 10, 2013 - 3:21pm Permalink
This fall I was at an IMPA event at a race track in New York state. I put my helmet on a table and went back after I got my food at the buffet an all the other seats were filled with GM folks I had not met and a couple Toyota guys I knew. One of the GM guys I was introduced to was Mark Reuss, President GM North America. He had come out to listen first hand to feedback on the Corvette Stingray. Yes, GM had a Stingray for use by writers on the track. He was a nice guy and offered me his card. We talked (off the record and kiddingly) about the Cadillac ATS-V. Only later did I Google and Wiki him and learn how amazing he was and his lineage (Dad worked at GM). Best of luck to Mary Barra. Hope to see her at future events mingling with enthusiasts and auto writers. As the current CEO of GM pointed out none of the top people at any "domestic" automakers are "Car guys" and none have been for a long time. Something to think about.