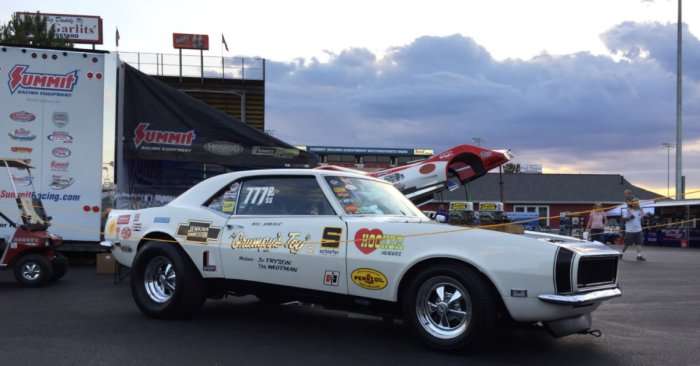 The TorqueNews/Camaros Unlimited Camaro of the Month for March 2018 is the original “Grumpy’s Toy IV”, currently owned by Vicki Bolla and Dale Carvender.
Advertisement

Each month, TorqueNews works with the members from the Camaros Unlimited Facebook group to select our Camaro of the Month. The process begins with the members of the Camaros Unlimited Facebook page – nearly 42,000 of them – nominating their favorite Chevrolet Camaro owned by a fellow member of the page. Once five owners have been nominated, the voting begins and when the balloting closes – we have our Camaro of the Month.

For March 2018, the Camaro of the month is the Pro Stock Chevrolet Camaro shown above, owned by Vicki Bolla and Dale Carvender of Pittsburgh, Pennsylvania. We asked Vicki for some information on his gorgeous 1st gen Camaro, and below you will find the incredible story of a truly legendary Chevy race car.

The car is awesome, but the story of how the couple came to own the car is the stuff that automotive dreams are made of, as this is the kind of thing that we all hope to happen when we buy an old muscle car online.

The Story of Grumpy’s Toy IV
The car is the Original Grumpy's Toy IV. It is the car that won the very 1st and 2nd ever NHRA Pro-Stock races and it was Bill "Grumpy" Jenkins' winningest car. It was also his favorite. Bill Jenkins is a legend in the drag racing world, he was a mechanical genius and an innovator. He was WAY ahead of his time. Thanks to this car and him, the Camaro gained the popularity it did back in the day.

I found the car by complete accident back in 2002, we were online looking for another Camaro to own and restore, we own an auto body shop here in Pittsburgh. I have a 68 Hardtop and Dale, my other half, has a 68 Convertible and we share another 68 hardtop that will be Pro-street car once it is complete. I was actually looking for a convertible since he had one and I LOVE ragtops...well I stumbled upon a 2 month old ad for a Camaro complete with a roll cage and it said BEST OFFER.... There were a few photos with the ad and I showed them to Dale and while I was not looking for another hardtop, I thought "well this already has a roll cage in the car as does the one we are working on". Dale took ONE look at the photos, especially the wheel wells and the way they were cut/hammered out to fit the tires and some other telltale signs on the car and said to me "That looks like Grumpy's Toy!" And I at that time had NO IDEA who or what Grumpy's Toy was...I knew who John Force was but I did not follow drag racing as a child as he did . I must say I am embarrassed about that fact but I was more into the NFL and MLB than the NHRA!! We struck a deal with the owner, who had NO IDEA what he had in his possession, the car looked NOTHING like it does now...in fact it was close to being ready to go to the scrap yard. The previous owner thought it was just an old local bracket car and nothing more.

We sent him a money order and he sent me the title and we went and picked the car up a few months later (there was 4 foot of snow on the ground at the time where the car was located) , It was in Upstate New York in the middle of nowhere basically and it was a 12 hour drive to get there. Once we arrived Dale and I loaded the car up, said our goodbyes and when we got about 1/2 mile down the road Dale said to me " WE JUST BOUGHT GRUMPY'S TOY!!" I being the skeptic that I am couldn't believe it, things like this JUST DO NOT happen to me.. And to be honest it took me A WHILE to really truly believe I had found this car!!!

We got the car home and as Dale started to work on it the car revealed itself with all the "fingerprints" if you will of Mr Jenkins. There were markings in the bare metal that indicated where the decals were that he had on the car, the cut out wheel wells and trunk floor, etc. We got the original transmission with the car as well as the shifter, Jenkins is stamped on the transmission also, HOW this man had no idea what he had is beyond me but lucky for us he didn't.

Dale contacted Jenkins Competition after he found the signs of Grumpy in the car and they helped us with the car. They sent us the original Dominator Carbs that were on the car and an original distributor which Mr. Jenkins (Grumpy) signed for us, those are basically the only parts he had left from back then. We got a lot of the original decals from them as well as well as advice and answers to our questions as Dale uncovered more and more signs of Grumpy as he worked on the car. They were instrumental in us being able to put the car back to the way it was back when Mr. Jenkins owned it and raced it.

We had the car finished and it was unveiled in July of 2016 at the Eastern Museum of Motor Racing in York, PA at the US 30 Reunion/Nostalgia Days. Present for the unveiling were Darwin Doll, Ed Hedrick (Grumpy's former driver and good friend), Larry Lombard, Wally Booth, Wally Bell, Susan Jenkins (Grumpy's daughter), Mike Keough and Charlie (Grumpy's former employees), Linda Vaughn (The Hurst Shifter Girl), Jack Redd and many others. The car has been Authenticated and Documented as being the real deal Original Grumpy's Toy IV.

We have since had the car on display at Summit Motorsports Park as special display car of Summit Racing for the NHRA Summitnationals as well as at their Super Summit Show. We have been to Maple Grove for Super Chevy, Summit Racing in Tallmadge Ohio for the NEOCC Camaro Fall Classic as their special guest, Indianapolis in Hot Rod Junction under invite of the NHRA. This year we will be in Syracuse under special invite for the Syracuse Nationals, and will be doing some charity shows as well as some other events.

The car has a period correct (but not numbers matching engine since Grumpy changed the engine in the car at least 20 times as we were told) .030 over 427 BBC in it with an original "cool can" that Grumpy had in the car as well. The car has no badging as Grumpy wanted to eliminate weight so anything not necessary was removed from the car. It has a full roll cage in it with the original transmission and shifter that was seen in the video of Grumpy slamming the gears that has been circulating the internet for a while now.

We would like to thank Mike Keough from Jenkins Competition and Dick Williams, the executor of Grumpy's estate ...both were INSTRUMENTAL in helping us put this car back together the way it was back in the day.

Congratulations to Vicki Bolla, Dale Carvender and their Pro Stock Camaro for winning the TorqueNews/Camaros Unlimited Camaro of the Month for March 2018, and for scoring this incredible piece of automotive history. If you would like to participate in the Camaro of the Month program with your Chevy muscle car, click here to join Camaros Unlimited!