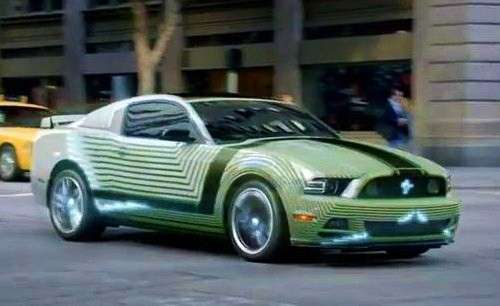 The 2013 Ford Mustang has received a subtle exterior redesign that makes the sporty American muscle car even more aggressive looking and the first television advertisement for the new Mustang will air this Sunday during the 54th running of the Daytona 500 – although the new commercial has shown up on the internet ahead of the debut during the Great American Race.
Advertisement

The first television ad campaign featuring the 2013 Ford Mustang begins with a 2013 Ford Mustang rolling along a busy city street when it catches the eye of a young woman walking down the sidewalk. As she stares at the silver 2013 Mustang, the car transforms before her eyes to what we can only imagine is her ideal new Mustang. The car turns deep red with a unique grille treatment, hood and side striping and custom wheels as it passes – showing the unique segmented taillights with sequential blinkers which are new for the 2013 model year.

As the red 2013 Ford Mustang continues along, it catches the eye of a chef standing along the street and it again transforms – this time into a white 2013 Ford Mustang GT with tribal images on the sides of the car that match the chef’s forearm tattoos.

The next observer of the now white 2013 Ford Mustang GT is a guy who looks like he might be a bike messenger and when our Mustang catches this guy’s eye – it transforms into the awesome 2013 Ford Mustang Boss 302 in Gotta Have It Green, complete with the new stripe package that pays homage to the Boss Mustangs of the 1970 model year.

Finally, as the 2013 Ford Mustang Boss 302 rolls up to a stoplight, a little girl in a pink tutu standing on the curb spies the gorgeous green Mustang and with the rev of an engine, the car transforms one last time – this time turning into the 2013 Ford Shelby GT500 in black. The voiceover guy proudly proclaims “everyone has an inner Mustang” and as the GT500 roars away, the voice finishes with “unleash yours”.

Ford has done an awesome job of gradually redesigning the S197 Mustang platform that was introduced in 2005 with a slight refresh in 2010 and again for the 2013 model year. In addition to the Mustang V6, the Mustang GT, the Mustang Boss 302 and the Shelby GT500 comprising the most powerful Mustang lineup in the history of the fabled pony car, options like Ford’s factory vinyl packages, unique exterior colors, new interior layouts and unique wheel options allow new Mustang buyers to customize the 2013 Ford Mustang like no other performance car in the past – from Ford Motor Company or anyone else.

The 2013 Ford Mustang offers outputs of 305, 420, 440 and 650 horsepower depending on the trimline chosen but with so many customization options, the new Ford Mustang allows consumers to unleash their inner Mustang from the Ford catalog before it ever reaches the dealership lot for delivery.

Check out the new video below of the 2013 Ford Mustang, which will make its TV debut this Sunday during the 54th running of the Daytona 500.

LG's New EV Battery Plant Is a Welcome News for Tesla
Tesla Giga Berlin's New Hurdle: It's Not Only the Gov't, but Now Tesla Itself
END_OF_DOCUMENT_TOKEN_TO_BE_REPLACED