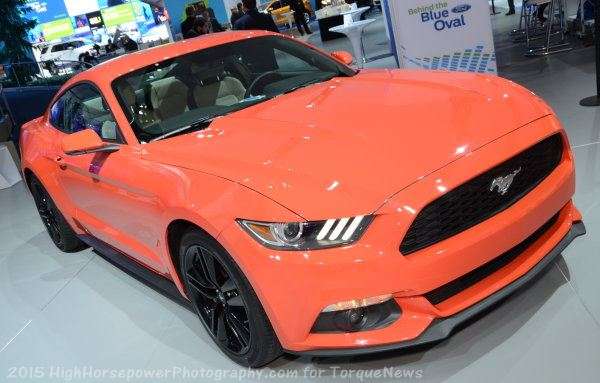 While the 2015 Ford Mustang is being priced extremely high in many global markets due to high import costs, those new Mustang buyers in Australia will be paying a much smaller price than those muscle car lovers in the other non-North American countries we have discussed in the past few months.
Advertisement

Ford has a strong performance following in Australia, but that popularity hasn’t been created by the mighty Mustang. While those Australian Ford fans who wanted a Mustang could get one through grey market importers, buying a car through that route gets very expensive. Also, the 2015 Mustang is the first designed for use in right hand drive markets, so Aussie drivers won’t need to worry about the conversion costs – or the headache of driving a car that wasn’t designed for their roads.

Making the 2015 Ford Mustang available through dealerships in Australia will make it far easier and far less expensive for Ford fans “down under” to park a new pony car in their driveway, but as is the case with every other foreign market for the new Mustang, Australian prices will be higher than what Americans pay for the new model. However, the price for the Australian market relative to the American market is nowhere near as high as it is in China, India or the United Kingdom.

Australian Base Pricing for the 2015 Mustang
The 2015 Ford Mustang will be offered in Australia in two trimlines, as is the case in China, Germany and the United Kingdom. The base model 2015 Mustang will be powered by the new 2.3L EcoBoost 4-cylinder while the 5.0L V8 will serve as the premium engine, with both engines coming with either the 6-speed manual or 6-speed automatic transmission.

The least expensive 2015 Ford Mustang fastback in Australia will have the 2.3L EcoBoost, the 6-speed manual transmission and a starting price of #44,990 AUD, which converts to $34,314 USD with the current exchange rate. That same EcoBoost/manual transmission fastback in the USA would start at $25,300 USD, so Aussie buyers are facing a markup of around $9,000. That same base model 2015 Mustang starts around $38,000 USD in Germany, $43,000 USD in the UK, $65,000 USD in China and $80,000 USD in India – making Australia the least expensive local market price increase we have seen thus far.

Expanded Aussie Mustang Pricing
While some markets only have estimated base pricing, the 2015 Ford Mustang for the Australian market has a bit more available pricing detail. The 2015 Mustang EcoBoost fastback with the 6-speed automatic transmission starts at $47,400 AUD or $36,147 USD, which is also in the $9,000 markup range over the $26,495 MSRP of that pony car in the US.

Simon wrote on April 6, 2015 - 10:24pm Permalink
I already have a deposit down for GT, although delivery is some time off. Note be careful when comparing Aus models to US models, as we only get the cars with what looks like the performance pack (Brembos, wheels etc). So the $55k Aus GT price is not too far off the US price after exchange rate. What annoys me most though is the tax on top of this price (which already includes federal sales taxes). My $55k GT is actually $62k by the time local (state) stamp duty and reg is applied. Yep, around USD$4k plus just to get a couple of number plates that don't even fit the car.
Dave wrote on April 7, 2015 - 5:17am Permalink
Any new info or performance upgrades
mike wrote on August 2, 2015 - 10:26am Permalink
Yeah I put a deposit down in July 2015, but expect delivery in about a years time, maybe more. But if the Aussie dollar drops too much I'm looking at paying more than the announced price already:(
Adam wrote on August 27, 2015 - 10:57am Permalink
Mike, if you have paid a deposit and signed a contract already, your price is secure. It doesn't matter what the exchane rate does. Your price is set - you have a signed contract. I am expecting my manual GT in Magnetic early December and cannot wait! Already got a few mods lined up.
DAVID GIL wrote on October 15, 2016 - 9:39am Permalink
Por favor me puede indicar el nombre del color que tiene el mustang. claro naranja. pero en especifico un codigo.. por favor..