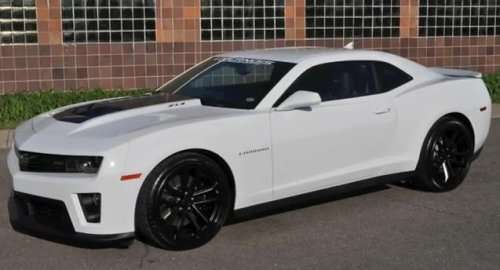 While there is no doubt that the 2012 Chevrolet Camaro ZL1 is far more than just a drag car, General Motors is aware that there will be plenty of ZL1 owners who frequent the drag strip and after running in the 11s with a stock 2012 Camaro ZL1, Livernois Motorsports has laid claim as the first people to put the ZL1 into the 9 second quarter mile range.
Advertisement

General Motors engineers were able to take a pair of 2012 Chevrolet Camaro ZL1 Coupes (one with an automatic transmission, the other with a manual) to the drag strip recently and get them both into the 11 second range. Those Camaros were stock down to the tires but the super muscle car shown in the video below has been pretty heavily modified by the American high performance experts at Livernois Performance of Dearborn Heights Michigan (just outside of Detroit) – with the results being a stunning quarter mile time of 9.87 seconds at 142.42 miles per hour. This makes the Livernois Motorsports Camaro ZL1 Coupe the first ZL1 to crack into the 9 second quarter mile club.

Best of all, those 2012 Chevrolet Camaro ZL1 owners who want a car that appears to be fully streetable yet can rip out high 9 second quarter mile times…Livernois is offering the full package installed and tuned for just $14,800. This package includes items like high flow cylinder heads, a high lift camshaft, a unique heat exchanger, an upgraded fuel system, long tube headers, a larger throttle body, an upgraded supercharger pulley and a dyno tune at the Livernois facility to ensure that all of those high performance parts are making as much power as possible. This package increases the power output from 476 rear wheel horsepower (580 horsepower at the crankshaft) and 476 rear wheel torque (556lb-ft of torque at the crankshaft) to a whopping 707 horsepower and 680lb-ft of torque at the rear wheels…enough to rocket this 4,295 pound muscle car into the high 9 second range in the quarter mile.

The only portion of the package shown thrusting the first 2012 Chevrolet Camaro ZL1 Coupe into the 9s is the wheel and tire package but those who are looking to do serious enough drag racing to fork out the price of the ZL1 plus the $14,800 price tag for this premium Livernois package will probably have certain wheels and tires in mind – if not already on the car. Livernois also offers less expansive/less expensive packages for the new ZL1 for those who want a little more performance but not $15k worth.

The video below courtesy of Livernois Motorsports shows the Camaro ZL1 on the scale before hitting the track with a weight of 4,295 pounds. This is a pretty hefty curb weight for a 9 second car the near-4,300lb track stock weight shows that there is some room to cut weight for those who want to go even faster in the quarter mile. It will be interesting to see what private owners are able to do with the 2012 Camaro ZL1 Coupe once these owners have had a chance to tear into them and perform modifications of their own including similar engine upgrades and – more importantly – weight reduction. Also, in the video below showing the Livernois Camaro ZL1 running in the low 10s and then the high 9s, it sounds like the driver came out fairly conservatively so with more seat time, the guys at Livernois might be able to get even quicker times out of their incredible in-house built ZL1. It should be pointed out that while the ZL1 has an incredibly high tech suspension setup, the 9 second Livernois Camaro ZL1 packed fully stock suspension and a stock automatic transmission with a custom calibration.

In any case, the Livernois Motorsports 2012 Chevrolet Camaro ZL1 Coupe has claimed the bragging right of being the first new ZL1 to rip through the quarter mile in the 9 second range. Congrats to the folks from Livernois for reaching this milestone and displaying why they are one of the top American muscle tuning shops in the world.

Thanks to Derrick for the heads up on this!

Image: The Livernois Motorsports Camaro ZL1 with the standard wheels

Anonymous wrote on May 21, 2012 - 10:36pm Permalink
i'll take a 2012 5.0 coyote with a ford racing supercharger or maybe a boss 302 l/s supercharged [it has forged internals]. i would love to see a 5.0 mustang run with that much work done to it most i see are pretty much stock, heads,cams,powdered rods,hyper pistons, converter& headers people just add a cold air intake a tune & supercharger and get 600+hp and run high 9's low 10's. come on put some light weight race parts in it and see what you get. whats livernois going to do with the new gt500 or even better [evolution] they've allready been running street legal gt's in the high 8's low 9's