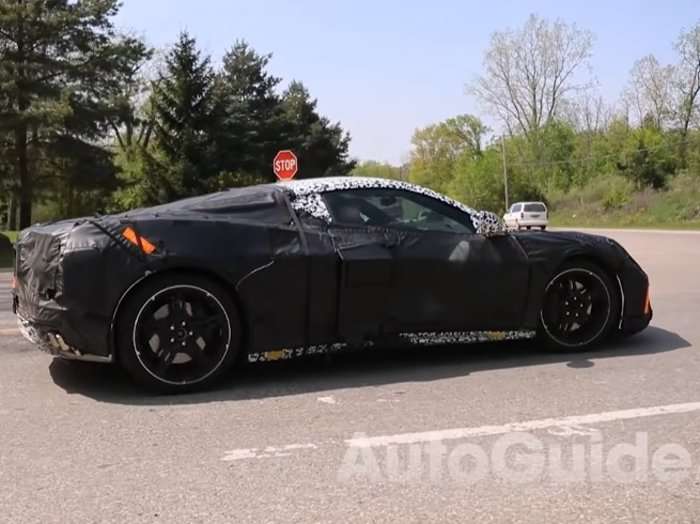 Listen to the Mid-Engine Corvette Exhaust Note on the Road

What we all believe to be the mid-engine Chevrolet Corvette has been caught driving on video in a quiet area, giving us a chance to hear the exhaust note of the next generation American sports car at lower speeds and lower engine RPM.
Advertisement

So, we still don’t have any official word that a mid-engine Chevrolet Corvette is on the horizon, but there is no question that General Motors is working on some variety of sports car with a mid-ship design. This past weekend, the folks from AutoGuide shared a video showing this mysterious mid-engine sports car that will likely be the next Corvette.

While we don’t get to see any high performance antics, we go get to hear the exhaust note of the mid-engine Corvette as it accelerates a few times at lower speeds. As you can see and hear in the video below, the new GM sports car has a distinct exhaust tone that people online think comes from a V6 engine, but I think that it is more likely a V8 with a unique setup – perhaps one with some turbochargers in-line.

Mid-Engine Corvette on the Move
In the video below, we get a handful of short clips of what we believe is a mid-engine Corvette test car cruising around a few different areas of Michigan, including M-59 near the GM Milford Proving Grounds and several roads in Fenton. In each of the short clips, we see the mysterious GM sports car sitting still and then slowly driving away.

We get to hear the exhaust grumble at idle and at low RPM. We also get to hear the transmission quickly pop from gear to gear. This audible information has led many people to believe that this car has the 10-speed automatic transmission or some variety of a dual-clutch setup. The exhaust note has also led some people to insist that this car is packing a high performance V6, as this car doesn’t sound like the current Corvette in some of the clips, but in other clips, it has the nearly-unmistakable sound of a V8.

The Exhaust Note
Mind you, it does have a unique exhaust note, but I believe that is due to one or two factors.

First, the mid-engine layout will have a very different exhaust system than what has been used on every other Corvette ever, so it isn’t likely to sound like the C7, even if it had the exact same engine.

Second, it has long been rumored that this mid-engine Corvette will have a new twin turbo V8. There have even been CAD images that reportedly showed a future GM V8 with a compact turbo setup. Although we would expect some audible whistle or some noise from the turbochargers in a car like that, having the forced induction components in the exhaust system will likely lead to a unique tone as well.

What do you think is under the hood? Check out the video below and share your thoughts in our comment section.

James Cliburn wrote on May 21, 2018 - 11:42am Permalink
Send any and all Corvette info.
Don Bjorkland wrote on May 21, 2018 - 9:17pm Permalink
Definitely V8 burble and it could be a 10 speed auto, but the 8 speed auto upshifts early also. The 8 and 10 speeds seem to up shift early on light throttle take off.
Shelia wrote on May 22, 2018 - 8:33am Permalink
I look forward to seeing what CORVETTE has to offer. I have owned eight Corvettes in my time and now I am 65 years old and i want to be the first in my hometown to own a mid-engine Corvette! I live in Deer Park Tx where we have lots of Corvette owners and other old car and hot rod owners. we have a car show every Friday and Saturday night and most of the lookers are interested in the Corvettes Several of us do the Hot rod power tour and Cruisin the Coast every year !