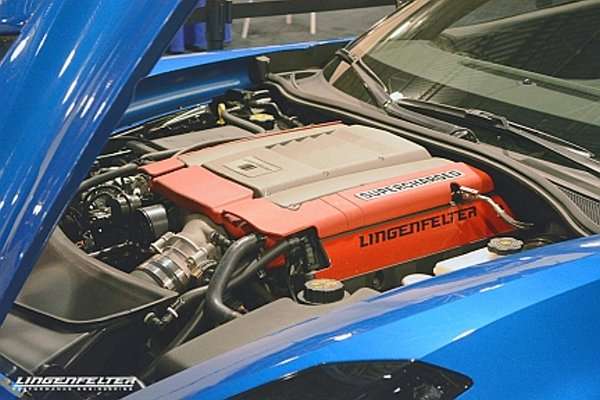 The folks at Lingenfelter have just announced their Stage 2 package for the C7 Corvette Z06, which lifts the output by 100 horsepower and 100lb-ft of torque in a very reliable way – adding improved internal engine components rather than just jamming in a bunch more boost.
Advertisement

The C7 Chevrolet Corvette Z06 is powered by the supercharged LT4 V8, sending 650 horsepower and 650lb-ft of torque towards the rear wheels. Like most supercharged vehicles, the new Z06 can produce gobs more power simply by adding more boost and more fuel, but going that route can cause increased strain on the engine and – ultimately – it could lead to an untimely demise to the engine. With this in mind, the Lingenfelter team designed their Stage 2 C7 Z06 package to add big power in a way that doesn’t add as much stress to the engine.

Lingenfelter Z06 Stage 2
The Lingenfelter Stage 2 kit for the 2015-2016 Chevrolet Corvette Z06 adds more boost, but the build starts by tearing apart the LT4 V8. The stock cylinder heads are removed and replace by a set of ported heads which allow better air and fuel flow. A custom specification camshaft is installed and when the cylinder heads go back on, exhaust headers replace the standard manifolds. Stage 2 also adds a dry sump engine damper, a 15% overdrive pulley on the supercharger, a high flow air filter, a 170 degree thermostat and all of the items needed for the installation. When coupled with a chassis dyno tune, this package lifts the output from 650 horsepower and 650lb-ft of torque to 750hp and 750lb-ft of torque.

This package also improves throttle response without compromising drivability and most importantly, it maintains the factory air-to-fuel ratio, thus not upsetting the catalyst protection mode that cuts the power of the Corvette Z06. Lingenfelter could have likely squeezed 750hp out of the LT4 V8 with just more boost, but this package adds that power in a way that should be no harsher on the engine internals than the stock output.

In addition to the working components that raise the power levels while maintaining the factory reliability of the Corvette Z06, the Lingenfelter Stage 2 kit adds chrome fender badges and brand badges inside of the car and under the hood.

The Lingenfelter Stage 2 kit for the 2015-2016 Corvette Z06 is not yet listed on the company website, so pricing is not available, but considering that this kit is more than just a pulley and extra boost – buyers should expect this to be a pricier upgrade. However, this package is “safer” than some of the other big power packages on the market, so Lingenfelter doesn’t just add more power…they improve the power output capabilities of the LT4 engine.

LG's New EV Battery Plant Is a Welcome News for Tesla
Tesla Giga Berlin's New Hurdle: It's Not Only the Gov't, but Now Tesla Itself
END_OF_DOCUMENT_TOKEN_TO_BE_REPLACED