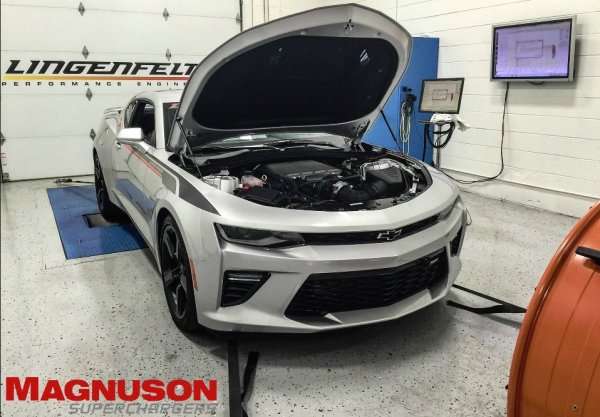 The supercharging experts at Magnuson have teamed up with Lingenfelter to design the first forced induction setup for the 2016 Chevrolet Camaro SS, and while they haven’t rolled out the specs on the 6th gen supercharger – the output should be well over 600 horsepower.
Advertisement

The 2016 Chevrolet Camaro is the most powerful to ever wear the SS badge, but we all know that owners will be quick to add extra power to the Camaro’s new LT1 V8. To answer that early demand for monster power from the 6th gen Camaro, Lingenfelter Performance has worked with Magnuson Superchargers to be the first to offer a supercharger package for the 2016 Camaro SS. Neither company has confirmed the power levels with this new blower setup, but Magnuson has confirmed on their Facebook page that the Lingenfelter 2016 Camaro SS is up and running with the new supercharger package.

Fortunately, based on the similarities between the C7 Corvette Stingray and the 2016 Camaro SS, we can make some guesses as to how much power a Lingenfelter/Magnuson supercharged 6th gen Camaro with the LT1 might offer.

Magnuson Supercharged LT1
Magnuson hasn’t stated how much of an increased 2016 Chevrolet Camaro SS owners will get from the supercharger designed in cooperation with Lingenfelter Performance Equipment, but this supercharger package should be very similar to the one offered for the C7 Corvette Stingray. While the Corvette has a slightly higher factory horsepower rating, both cars have the new GM LT1 V8 with 455-460 horsepower depending on the vehicle and whether or not the vehicle has the performance exhaust system.

The 2016 Chevrolet Camaro SS has the same LT1 so I would expect the results of adding the Lingenfelter/Magnuson would have very similar results in every way. 620-630 engine horsepower seems to make sense, with a similar 120 wheel horsepower gain coming for the LT1 – leading to well over 500 wheel horsepower in the 6th gen Camaro. With the boost pressure being so conservative, it seems unlikely that Lingenfelter or Magnuson would see a need to dial down the performance, so it seems likely that this blower package will be nearly similar to that of the Stingray.

Magnuson has commented a few times on their Facebook page that the official power numbers are coming, but when they are announced, you will find them here on TorqueNews. Until then, those 2016 Camaro SS owners who want to pack big power can contact Magnuson and/or Lingenfelter for more information on this package.