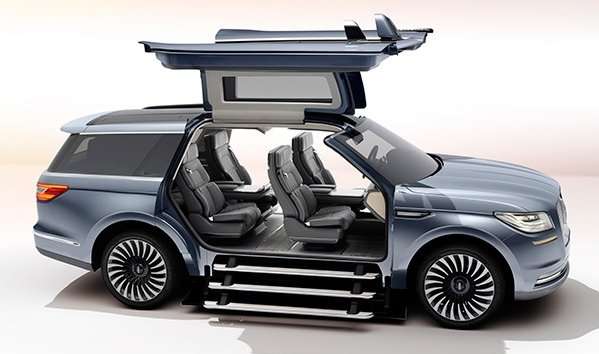 Ford Motor Company has used the 2016 New York International Auto Show to show off their new Lincoln Navigator Concept and while this massive SUV has a few aspects that aren’t exactly production friendly – this new Navigator Concept paints a beautiful picture of the future of the large Lincoln SUV.
Advertisement

There are a great many people in the automotive world who would like to completely count Lincoln out of the American luxury car competition discussion, but Ford Motor Company isn’t willing to let Lincoln fade without a fight. The new Lincoln Navigator Concept is the latest piece of machinery offered up by Ford to spice up their luxury brand, following up the Continental that we first met last year. We know now that the Continental is headed to production and while this new Navigator has a few features which I don’t believe will make it to your local showroom – a vehicle that looks like this one could go a long way in bringing new buyers to the Lincoln brand.

"The all-new Navigator Concept reinforces our commitment to give every Lincoln client what we call quiet luxury – vehicles and experiences that are elegant, effortlessly powerful and serene," said Kumar Galhotra, president of Lincoln. "This kind of quiet luxury sets Lincoln apart. Now, we're showing fans of large SUVs how we can exceed their expectations, without being the loudest statement on the road."

Lincoln Navigator Concept
While the Lincoln Navigator Concept on display in New York is purely a concept, it is expected that the more production friendly aspects of this beautiful machine will be present when the production version of the new Navigator arrives sometime next year. Most notably, we can expect that the gigantic gullwing doors will be nixed for something that will work in a normal garage and with the vertical doors will go the crazy deploying step system.

However, if you close the big doors, the Lincoln Navigator Concept looks a great deal like a mix between the old Navigator and the new Continental sedan – and this is most certainly a look that could work well in a dealership setting. Just swap in some normal doors and the exterior of this luxury SUV is a total success. It is big and elegant, with the bold, distinctive face of the new Lincoln brand and just enough silver trim to emphasize the luxury feel.

On the inside, the Navigator Concept features three rows of seating, with plush bucket seats in the first and second row along with a third row sporting the same design. All six seating positions feature Lincoln’s premium patented Perfect Position Seats with 30 different parameters of adjustment and like any proper luxury vehicle, the Navigator Concept features a state of the art infotainment system with a dash mounted screen and gigantic touchscreen entertainment systems for the second and third row occupants.

The interior also features a rail running down the middle that I would expect to see disappear before production, and the Navigator Concept also comes with a unique wardrobe management system in the rear cargo area. That might be available as an option on the production model, but the fact that it completely obstructs the driver’s view out the back makes it seem like an unlikely production feature.

There is no mention of the suspension setup or the transmission, but I would bet a shiny nickel that the production Navigator will have the new 10-speed automatic transmission. We do know that the Navigator will come with an adjustable drive mode system which will allow the driver to adjust the steering, suspension, throttle input and transmission shifts to best suit their needs – offering an ideal mix of performance and comfort.