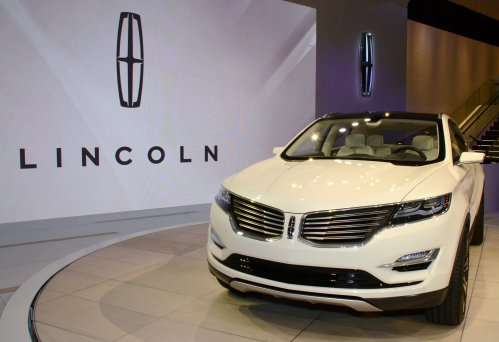 The 2013 Detroit Auto Show introduced the world to the new Lincoln MKC Concept – a great looking compact SUV that should go a long way in proving Lincoln dealerships with the fresh vehicles that the luxury brand so desperately needs.
Advertisement

The Lincoln MKC Concept is based on the same chassis architecture as the Ford Escape and the Ford C-Max but this compact luxury SUV is far more than just a rebadged version of the popular Escape. While the differences might be minor, the MKC differs from the Escape in almost every exterior dimension with a longer wheelbase, a longer overall length, a wider stance, and a lower ride height. On top of the slight differences in the various dimensions, the Lincoln MKC Concept features an exterior design that looks nothing like the popular new Ford Escape.

The new Lincoln MKC Concept shares many of the basic styling directions of the new MKZ midsized sedan and that begins with a similar front end design that we see across the entire current Lincoln brand lineup. In some cases, an automaker who tries to apply a similar style to an entire family of vehicles can go awry when those features are properly fit to the size or shape of the vehicle but in the case of the new MKC Concept – the bold front end treatment looks fabulous. The split wing grille design, with large, prominent upper grille openings that flow out into high tech LED and projection headlights give the MKC the look of something like an MKS or MKZ on steroids. The relation between these vehicles is obvious but surprisingly, the MKC might just wear this front end design better than the production models that share the look.

The longer form of the new Lincoln MKC Concept presents a bolder, more aerodynamic and more luxurious look than the Escape with which it shares a platform while some massive 20” wheels and a low roofline present a low, sleek silhouette – a stark contrast to the upright, very SUV-ish shape of the popular Escape. Unique to the MKC (at least in concept form) is a huge glass roof that is a feature that screams luxury with a basic design that is something that we have loved on a variety of German luxury SUVs. Out back, the MKC wears a gorgeous tail light design that bears a striking resemblance to the new MKZ with a powerful LED treatment that dominates the back end of this curvy SUV. Much like the front end, the back end of the new MKC is one of those features that is really going to wow consumers as – along with the MKZ – this new compact SUV has a much bolder, handsomer look than many of the recent Lincoln models. The MKC doesn’t look like a rebadged Ford because it isnt simply a rebadged Ford and that should equal great things in the sales column once this SUV hits dealerships around the country.

On the inside, the Lincoln MKC Concept is packed full of the luxury amenities that you would expect from a vehicle in the luxury crossover segment like power everything, leather from top to bottom, steering wheel controls for pretty much everything in the cabin and a high end infotainment system that is controlled by a massive touch screen. Lincoln has done a great job of upping their luxury game in the past few years with vehicles like the MKS, the MKX and the MKT so it comes as no surprise that both the production level MKZ sedan and the MKC Concept will feature a level of interior luxury that will allow it to compete with the best from Cadillac and Audi.

No information was offered on the drivetrain of the Lincoln MKC Concept but we can almost guarantee that there will be one of two EcoBoost 4-cylinder engines – most likely the 1.6L and 2.0L variants used in the current Ford Escape. Of course, we can expect an advanced all wheel drive system and a transmission that will work with the super efficient EcoBoost engines to offer great capabilities and impressive fuel economy.

Ford Motor Company has long been promising Lincoln dealerships some new models to help freshen up their showrooms and at the 2013 Detroit Auto Show, the new Lincoln MKC Concept offered the world a look at Ford’s plan to improve things for the Lincoln brand. While FoMoCo recently unveiled the new Lincoln MKZ with a gorgeous new exterior and a luxury filled interior, Lincoln will need more than one new model to help pull the brand out of the tailspin that many dealerships have been in since losing the Mercury brand. In 2012, Lincoln was one of only five brands in the US market to show negative growth compared to the year before with only Suzuki and Mitsubishi doing worse last year in terms of growth. More importantly, Lincoln’s sales decline of roughly 4% was more than double the negative growth shown by the Cadillac brand – a lineup which is arguably Lincoln’s biggest competition.

Part of the decline of Lincoln over the past two years comes due to the somewhat stagnant luxury lineup that has seen a removal of popular models like the Town Car and few changes to the more popular models including the MKZ and the MKS. The MKS has received a recently facelift that helped sales come up a bit in 2012 but for the popular MKZ – sales were down as consumers waited for the new version of the Fusion-based sedan. The most popular vehicle among the Lincoln brand late in 2012 was the MKX, a midsized SUV based on the Ford Edge and considering the success of the MKX – we can expect that the new MKC would be just as popular (if not more so).

The other factor that came as a big hit to the Lincoln dealerships around the country was the demise of the Mercury brand. With the Mercury vehicles in the same dealerships as the Lincoln vehicles, there was more foot traffic created as many people who were looking for the more affordable Mercury models came into the dealership looking for a new car or SUV. Inevitably, some of those people who walked in looking for a new Mercury drove out in a new Lincoln but when Mercury was killed off – those consumers looking for vehicles on the more affordable end of the spectrum were no longer stopping in to see new Lincoln vehicles. In addition to providing a small, more fuel friendly alternative to the MKX, the Lincoln MKC should entice new buyers to the luxury brand with a base price that will likely be the lowest in the Lincoln lineup.

Unfortunately, the Lincoln MKC Concept as we see it is still only a concept vehicle but Ford executives have hinted that this vehicle isn’t all that far from seeing production. Once we get closer to that point, we can certainly expect to learn more about the MKC with the more crucial piece of information pertaining to the drivetrain. In the meantime, check out are gallery of the new Lincoln MKC by clicking any of the thumbnails above on the right.

LG's New EV Battery Plant Is a Welcome News for Tesla
Tesla Giga Berlin's New Hurdle: It's Not Only the Gov't, but Now Tesla Itself
END_OF_DOCUMENT_TOKEN_TO_BE_REPLACED