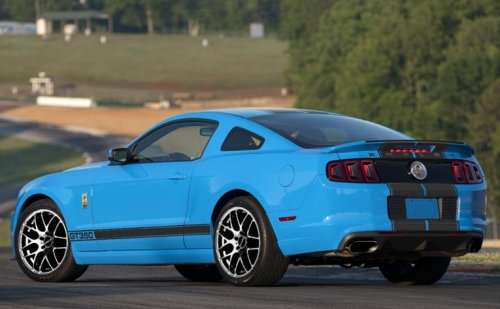 Even though automotive legend Carroll Shelby passed away in May, the company that features his name has continued on with business as usual and yesterday Shelby American announced the changes for the limited edition 2013 Shelby GT350 Mustang – including a handful of new features and a spread of new options.
Advertisement

The 2013 Shelby GT350 Mustang is similar in many ways to the 2012 model year package, being based on the Ford Mustang GT in either coupe or convertible form with either an automatic or manual transmission. The 2013 GT350 is powered by the same 5.0L V8 as the Mustang GT but the power output has been bumped up in the standard, naturally aspirated form from 420 to 430 horsepower. However, those who want a whole lot more punch out of their 2013 Shelby GT350 can opt for either one of the Ford Racing/Whipple supercharger packages that increase the power output to 525 or 624 horsepower, depending on the exact package chosen.

"The Shelby GT350 is one of the world's most celebrated and iconic modern muscle cars," said John Luft, president of Shelby American. "For the third model year of the contemporary Shelby GT350, we've further refined the car with options and equipment requested by enthusiasts. The Shelby American team is following Carroll Shelby's playbook to continue building high performance cars and parts designed to keep our customers at the front of the fast lane."

The most significant change for the 2013 Shelby GT350 Mustang is the new rear end which departs from the radically unique rear fascia of the 2011 and 2012 models to one more similar to that seen on the current production Mustang GT. The 2012 GT350 had a unique blackout panel flanking the Shelby specific tail lights with a molded spoiler above the lights and the Shelby name emblazoned across the tail just below the blackout panel – all of which were mounted on a protruding rear fascia. Along the bottom of this fascia, the 2012 GT350 a solid lip that ran all the way around with the only break being right in the middle to make room for the dual exhaust tips. The 2013 Shelby GT350 (as shown in the image above on the right) has the same sexy LED tail lights as the 2013 Mustang GT, with a Shelby-specific faux gas cap in the middle of the trunklid and a rear spoiler similar to the one found on the Shelby GT500 Mustang in place of the molded duckbill wing. Along the bottom, the new rear fascia of the GT350 sports a set of large, oval exhaust tips mounted in a contrasting black splitter…also similar to the GT500.

In addition to the new rear end on the 2013 Shelby GT350 Mustang, all of the colors currently offered on the standard production 2013 Ford Mustang GT are available for the Shelby GT350. This means that buyers can select from nine different colors including Grabber Blue, Sterling Gray Metallic, Gotta Have It Green (my personal favorite), Candy Red Tint Coat Metallic, Ingot Silver Metallic, "Deep Impact" Blue Metallic, Race Red, Performance White and Black – along with picking from either Satin Black or Gloss White stripes for all of the color options. In addition to those two stripe options, those 2013 GT350 buyers who pick Performance White can opt for a unique Azure Blue Metallic stripe package. For comparison, the 2011 Shelby GT350 was only available as a coupe in white with blue stripes and in 2012, the GT350 was offered as a coupe or convertible but only in white, red, blue and black (with gold stripes).

Finally, the 2013 Shelby GT350 Mustang gets an array of new optional features including a glass roof, Recaro race seats and a cold air intake package that raises the output of the naturally aspirated base GT350 to 450 horsepower. Buyers can also add an enhanced braking system, a one piece driveshaft, an enhanced cooling system, a billet engine dress-up kit more in an effort to add performance and that personal touch.

"The Shelby GT350's rich history is well-documented," added Shelby American Vice President of Production Gary Davis. "People who value that heritage asked us to repeat Shelby history with new options this year. We did that and stayed true to our commitment for performance with a no-comprise car that honors Carroll Shelby and our past."