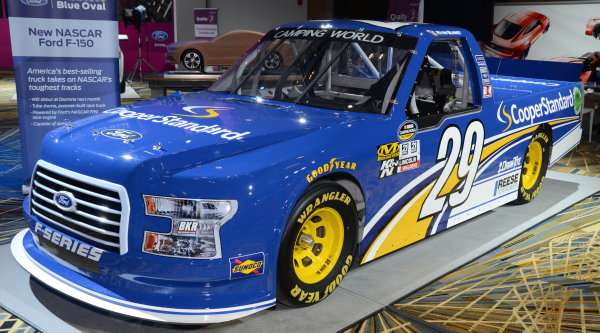 The first collection of curb weight data for the 2015 Ford F150 has hit the internet and with a weight of just 4,050 pounds in its lightest form, the new aluminum F150 weighs far less than any of the half ton competitors along with weighing less than the Chevrolet Camaro ZL1.
Advertisement

When Ford announced that the 2015 F150 would have a body largely comprised of aluminum, the company stated that this approach would shave as much as 700 pounds from the bestselling truck in America. We were left guessing as to just how light the new F150 would be and I speculated that the weight of the lightest F150 could drop under 4,000lbs. While the new half ton Ford isn’t quite that light, it is very close, with the smallest new F150 tips the scales at just 4,050lbs. This makes the 2015 F150 by far the lightest half ton truck on the market, but it also makes the F150 lighter than some of the larger midsized trucks on sale today.

The Lowest 2015 Ford F150 Curb Weight
Ford Motor Company hasn’t offered up a complete list of curb weights for the 2015 Ford F150, but the folks at Autoblog recently posted an image of a Ford spec sheet showing the official weight for about half of the possible configurations. That image revealed that the lightest 2015 F150 is (not surprisingly) a regular cab with the short bed, rear wheel drive and the new 3.5L V6 engine; which tips the scales at just 4,050lbs. A base model 2014 F150 with the short bed, smallest cab, rear wheel drive and the base V6 weighed 4,685lbs so the least expensive and lightest 2015 F150 is right around 635 pounds lighter than the same truck last year. That is a decline of about 13.6% across similar base model pickups.

2015 F150 Versus the Competition
The 2015 Ford F150 weight sheet that was posted online has more than 40 line items for different cab, bed and drivetrain configuration, but in comparing the lightest 2015 F150 to the comparable trucks from the competitors – we can get a good look at how the new half ton Ford sizes up.

I hunted down the lightest curb weights for the current Ram 1500, Chevrolet Silverado 1500 and Toyota Tundra to see how they compared to the 2015 F150. For Ford, the advantages are very impressive.

The lightest Ram 1500 and Silverado 1500 come with similar features to the lightest new F150, including a regular cab, a short bed, rear wheel drive and a naturally aspirated V6 engine. The Ram Tradesman RWD V6 weighs 4,509lbs while the Chevy 1500 weighs just 4,387lbs; so the F150 is 459lbs lighter than the Ram and 337lbs lighter than the Chevy. (Note: I originally said that the Ram weighed 4,685. Chrysler informed us that the lightest Ram 1500 actually weighs 4,509. The numbers here have been changed to reflect that correct weight.)

The lightest Toyota Tundra comes with a regular cab and long bed along with a standard V8 and rear wheel drive. You cannot get the Tundra with the small cab and short bed, and there is no longer a V6 option for the Tundra so the lightest half ton Toyota weighs in at a hefty 4,920lbs. For the sake of comparison, the 2015 F150 with the 5.0L V8, rear wheel drive and the longer bed option weighs 4,344lbs, so Ford has a 600+ pound advantage over the lightest Tundra when the basic configuration is the same. The new F150 is also lighter than the larger Toyota Tacoma models, sometimes by significant amounts, so the new F150 will even size up nicely against trucks in the smaller segment.

The 2015 Ford F150 Versus the Chevrolet Camaro ZL1
I should first say that I understand that comparing the 2015 Ford F150 to the Chevrolet Camaro ZL1 in any way may seem ludicrous, but this comparison does a great job of showing how light this new F150 really is relative to other vehicles on the road today. The Camaro ZL1 is one of the most technologically advanced muscle cars of all time, being able to blast around the famed Nürburgring quicker than almost any other muscle car ever. The new F150 regular cab with the base V6 weighs 70 pounds less than the Camaro ZL1.

While the jury might still be out as to whether or not the aluminum body of the 2015 Ford F150 will be tough enough to stand up to the abuse of truck life, there is no question that the use of aluminum has had a massive impact of the weight of the truck – and that will make it better in every way.