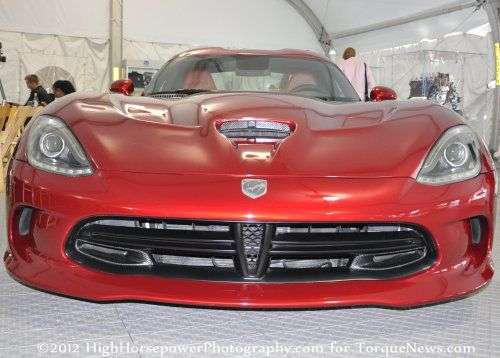 When the 2013 SRT Viper reaches full production later this year, the Chrysler Group plans to impose strict requirements for carrying the new supercar – meaning that less than 20% of the company’s dealerships around the country will have the new Viper on their showroom floor.
Advertisement

Earlier this month, SRT brand President and CEO Ralph Gilles spoke with a group of media members during a broadcast interview, explaining that the 2013 SRT Viper would bring in a new kind of customer. To cater to that new kind of customer, Gilles expects those dealerships who want to carry the 2013 Viper to meet a handful of requirements – leaving as many as 85% of the dealerships around the country without a Viper to show customers. Once all of the requirements are met, Gilles expects that only 15-20% of the company’s 2,400+ dealerships will be considered to sell the new Viper.

"We're going to open it up to any dealer who can put the money forward and the training, but it's going to be pretty difficult to hit all of those things," Gilles said during a broadcast interview with journalists in Detroit this month. "You've got to have the training, the facilities, and some history of selling Vipers and SRTs in general."

In order for a dealership to even request the right to sell the 2013 SRT Viper, the dealership must train a sales and service staff to deal specially with the new Viper along with purchasing the an array of special tools needed to perform service on the 2013 Viper. These hopeful dealerships will also have to be willing to make renovations to their dealership in order to provide a special area for the Viper – although no specifications on what types of improvements will be required in order to apply for the right to sell the Viper. On top of a dealership being willing to spend money on tools, facility upgrades and training of special service and sales staff – the Chrysler Group will also take into account those dealerships that had the greatest success selling Vipers in the past as well as sales of current SRT brand products.

The Chrysler Group has not stated how many examples of the new SRT Viper they plan to produce each year but past numbers indicate that there will simply not be enough production (or demand) for every one of the 2,400+ Chrysler Group dealerships to have one. In the Viper’s very best year in terms of sales (2003), the company sold just 2,103 Vipers during the year. Even if the Chrysler Group expected the 2013 SRT Viper to see an improvement of 10% over the best Viper sales year ever – there still wouldn’t be enough Vipers built to send every dealership one. More importantly sending one to every dealership would leave some higher volume Viper dealers without the inventory that they need to move units while other, low Viper volume dealers would have cars sitting around collecting dust and that is the last thing that Chrysler wants with the 2013 Viper.

Production of the 2013 SRT Viper is expected to begin later this year but before we get to that point, we can expect the Chrysler Group to lay out more information as to exactly what is expected from those dealerships who wish to sell the 2013 Viper. Realistically, those dealerships that sold the most Vipers between 1994 and 2011 can expect to get the biggest volume of deliveries and we can expect that those high Viper volume dealerships will also be quick to train a service staff and sales staff to handle the selling and fixing of the new Viper, as well as buying the required tools. As for the facility upgrades, it could include a special area within the dealership showroom that makes the Viper the main attraction but details on those required renovations are likely to not come out until we are closer to the start of production.

In the long run, this means that prospective 2013 SRT Viper owners who live in the middle of nowhere may have to do some traveling to buy the new Mopar supercar, provided that their local dealership does not have the financial means or the past sales success to be considered for the new Viper. However, in most cases the dealerships that do not get the Viper probably do not need to have one on their showroom floor if they don’t have the capacity to sell or service it so these requirements may have very little impact on many dealerships. At the same time though, some diehard Dodge lovers who have been hoping to see the 2013 Viper when it arrives at their local dealership may find that their friendly neighborhood Chrysler Group dealership is not one of the 15-20% granted permission to sell the new 640 horsepower supercar.

It will be interesting to see how this plan works out, especially after the first wave of 2013 SRT Viper coupes have been built and delivered to dealerships. There will almost certainly be a point in the new Viper’s lifespan where the production capacity exceeds current demand at a strong enough rate where Chrysler can afford to send a couple cars to dealerships that are on the fringe of being accepted – but that could be years down the road.