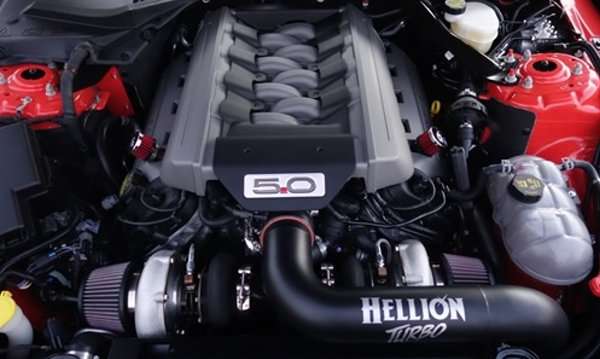 The same Ohio Ford dealership which made headlines for introducing a “ready to drive” 727hp 2015 Mustang GT has announced a new twin turbo package which offers as much as 1,200 horsepower “with supporting mods” – and this package starts well under $50,000, including the cost of the car.
Advertisement

Now, before everyone runs to the comment section to insist that a 1,200hp 2015+ Ford Mustang GT for under $50,000 isnt possible, read the rest of this piece. Lebanon Ford claims that “with supporting mods”, their in-house twin turbocharged Mustang GT package can make around 1,200 horsepower, but as they come from the Ohio dealership, the actual output is much lower. That is why we included the asterisk in the title, as this package is capable of 1,200hp - it does not offer 1,200hp from the dealership.

However, for someone looking to get into a twin turbocharged 2015-2017 Ford Mustang GT for under $50,000, the Lebanon Hellion package is an interesting option – with power levels starting in the 550 rear wheel horsepower range.

The LFP Hellion Ford Mustang
As was the case with their 727 horsepower supercharged 2015+ Mustang GT, Lebanon Ford has turned to their performance department to cook up an even more potent package. This time, rather than the Roush supercharger, Lebanon has opted for a Hellion twin turbo setup mounted between the radiator and the engine and, as was the case with the supercharged Mustang GT with 727hp – buyers can order this package from Lebanon Ford and pick up their brand new Mustang with a twin turbo setup already in place.

The heart of the LFP Hellion Mustang GT is a pair of 62mm Precision Turbo turbochargers, which are mated with the exhaust headers needed to mount the turbos, Turbosmart bypass valves, a large dual inlet intercooler and a boost controller setup which offers a range of 5 to 30psi. This setup is offered in two forms, with the first package adding a Bassani cat-back exhaust system and 47lb Ford Racing fuel injectors for the price – including the new Mustang GT – of just $45,499. According to Lebanon Ford, this package is designed to run around 5-6 pounds of boost, resulting in around 550-600 rear wheel horsepower. Assuming an 18% drivetrain loss, this twin turbo setup is making somewhere in the area of 670-730 horsepower at the crankshaft.

Those buyers who want even more power can opt for the second LFP Hellion package for their Mustang GT, which includes the components from the first package and adds 95lb fuel injectors, a fuel pump booster, high volume oil system gears and 800hp axle shafts from the DriveShaft Shop. This package would obviously support more power, but Lebanon points out that anyone who really wants to get more than 1,000hp needs to contact them for more information.

Ultimately, you could almost certainly build the 5.0L V8 to make more than 1,000hp with this twin turbo setup, but it would require far more work to the engine than just bolting up a turbo setup and some fuel upgrades. I am guessing that the 1,200hp figure includes some serious internal engine work, as well as beefing up some other components of the drivetrain. Otherwise, this is just a 1,200hp transmission killer.

In any case, I want to stress that Lebanon doesn’t claim that their package makes 1,200hp, but this turbo setup on the 5.0L V8 with other supporting mods can, in theory, create 1,200hp, so for someone looking to build a monster Mustang – this package could be a good basis for your project. Best of all, with the components of the second package, the cost (including the car itself) starts at just $49,995.

The only downside is that this twin turbo package will void your Ford factory drivetrain warranty, so any problems which occur to the engine, transmission or rear differential are likely to be rejected for a warranty claim. That being said, anyone looking to build a twin turbo Mustang GT knows that they will be voiding their warranty – Lebanon just saves these folks the work by getting that project started for them.