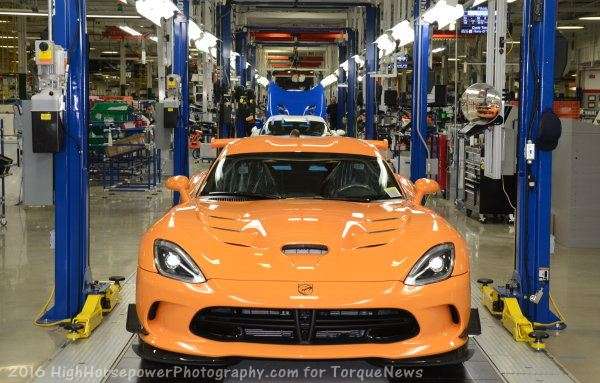 Since reporting that production of the Dodge Viper ended back in October, I have received a tremendous number of messages from readers who are disappointed about their inability to custom order a Mopar supercar, but it looks like FCA will reopen the Viper order banks by the end of the year – almost serving as a Christmas present for financial comfortable gearheads.
Advertisement

Production of the modern Dodge Viper seemingly came to an end back in October when FCA halted production at the Detroit Connor Avenue Assembly Plant where the American supercar is built. It was assumed by many that October would be the end, but FCA was quick to point out back then that production had been halted, not finished altogether. Well, it could have been the end of production of the Viper, but an FCA representative back then stated that if there was enough interest – there was a chance that production could start back up.
Well, evidently there is enough interest, as The Detroit News announced recently that FCA would reopen the order banks and restart production before the end of the 2016 calendar year.

Earlier this week I had a chance to chat with a few FCA representatives about the upcoming Dodge Viper production run, which should come at the right time to serve as one incredible Christmas present for someone.

Viper Ordering Details
When production of the Dodge Viper was halted back in October, it wasn’t due to lack of interest – it was due to lack of some key components. The company had plenty of orders for new Vipers, but the company was facing a shortage of headlights, among some other components. FCA stopped production because they were running out of parts and before they can restart production or start taking new orders, they have to perform a thorough inventory of what components they have on hand. The company will look at what they have and figure out how many cars they can build for the rest of the 2017 model year. Once that process has been completed, we will get more information on which trimlines will be available – but right now Dodge isn’t able to say for certain which packages will be available when the order banks reopen.

Figure that if they have the components to put together a complete car, the base model Dodge Viper SRT should be available and the customized GTC package should be available – although the options could be limited. I also expect the company to try to make at least a few more American Club Racer (ACR) models due to the massive popularity over the track monster, but that depends on the company’s ability to get all of the unique components of that highest performance Viper.

We do know that Dodge is not planning any more special edition trimlines of the Viper for 2017. I have been asked by a few readers if there might be an “end of the line” edition of sorts, but right now, Dodge does not plan to offer more limited edition models.

How Many More Vipers?
None of the folks from FCA with whom I have spoken about the final production run of the 2017 Dodge Viper have been able to offer up any sort of number as to how many more Vipers will be built, but every representative has suggested that the number will be very low. If the company was low enough on some key components that they closed the order banks and halted production in the final model year for the current generation, you have to expect that they were extremely short on those items. With that in mind, it doesn’t seem likely that the company will just “find” headlights for a hundred cars – so if you really want to order a custom 2017 Dodge Viper during the final production run, you would be well advised to begin sweet-talking your local Dodge dealership as soon as possible. When the order banks do open, they will only be open until FCA has received enough orders to cover the rest of their available production volume and after that, production of the Viper will almost certainly be finished.

Again, the order banks are expected to open before the end of 2016, so if you are serious about buying one of the final 2017 Dodge Vipers, it could serve as one of the greatest Christmas presents ever – even if you are gifting it to yourself.