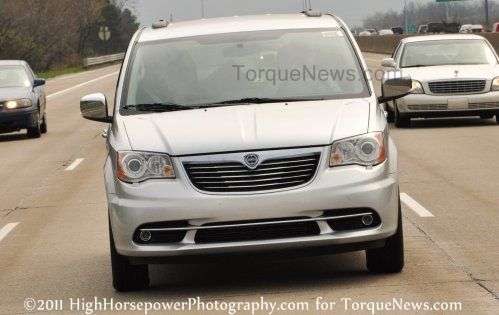 The Chrysler Group announced ahead of the 2011 Geneva Motor Show that a handful of Chrysler brand models would be rebadged and sold in the European market under the Lancia brand and yesterday, TorqueNews caught a glimpse of the 2011 Chrysler Town & Country turned Lancia Grand Voyager on the streets of Detroit.
Advertisement

The 2011 Chrysler Town & Country is a popular vehicle around the Motor City so when we came upon this relatively run-of-the-mill silver Chrysler minivan in traffic, it barely stood out aside from the bold Lancia shield on the back between the windshield and the chrome appliqué. On the Chrysler version, the large chrome strip running across the middle of the rear door carries the Town & Country name but, as you can see in the gallery below, this version clearly says Grand Voyager.

The next most interesting feature of this 2011 Chrysler minivan turned Lancia Grand Voyager is the small CRD badge in the left rear corner of the vehicle. Unlike the Dodge Grand Caravan and the Chrysler Town & Country that are powered only by Chrysler’s 283 horsepower Pentastar V6, the Lancia version will also get an optional common rail diesel (CRD) engine that offers improved emission levels and almost 30mpg. This 2.8L diesel produces 163 horsepower and 266lb-ft of torque and while the European market is keen on oil burners, the average US minivan buyer is not – so there isn’t a great chance that we will see the CRD option in Chrysler or Dodge minivans anytime soon.

Finally, as we maneuvered around the new Lancia Grand Voyager for some front end shots, we got a look at a front end nearly identical to the 2011 Town & Country with the major additions being the Lancia badge atop the slotted chrome grille and the headlight washer nozzles that I’ve not seen on minivans in the US market. Also, as you can see in the gallery below, from a close front corner angle, it almost looks like the Lancia version has a slightly more aggressive lower fascia, with the bottom edge protruding slightly out away from the body line.

The Chrysler Group’s success depends on their ability to compete not just on US soil, but in the world market. Their ability to rebadge vehicles built for the US market and send them overseas could help improve the bottom line while also raising and improving brand recognition in new markets around the world.

My thanks to the individuals driving the Lancia Grand Voyager for cruising alongside and behind as we snapped a few pictures of their interesting vehicle. I have blurred their faces and concealed their license plate (crudely) for their privacy.

Click here to have a look at the gallery of the Lancia Grand Voyager on US soil and check out the links below for other Chrysler news!

Tesla Contemplates A New Strategy for China Retail even As Sales Boom
Jay Leno on Elon Musk & EVs: “I Think He Should Get ... Credit"
END_OF_DOCUMENT_TOKEN_TO_BE_REPLACED