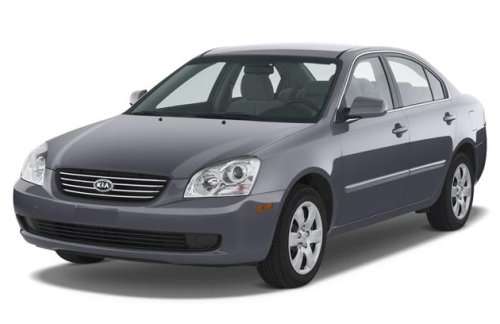 The National Highway Traffic Safety Administration and Kia Motors have announced a recall of over 145,000 Rondo minivans and Optima sedans over a concern that they may have been equipped with a faulty airbag component that could cause the airbags not to deploy in the event of an accident.
Advertisement

The problem with the 2006-2008 Kia vehicles being recalled focuses on the clock spring; an internal component found in the steering wheel assembly. Kia has found that, over time, the clock spring assembly is likely to wear quickly and fail to the point of breaking and when that happens, the airbag warning light will come on and in the event of an accident – there is a good chance that the driver’s side airbag will not deploy. Needless to say, the driver’s side airbag not opening poses a serious safety risk so the NHTSA and Kia Motors have made the call to get these 145,000+ vehicles back to dealerships for repair.

Clock spring problems have become fairly common across all automakers, with reports of issues as minor as the horn sporadically honking but in many cases (like this one), the clock spring is a vital component of the driver’s side airbag system so if this issue is left unaddressed – it could post some serious issues. The good news is that although Kia has addressed several of these issues in the real world under warranty repairs, there have been no reports of injuries being caused by the airbags not opening as a result of the clock spring failure in 2006-2008 Kia Optima or 2007-2008 Kia Rondo models.

This new Kia Rondo and Kia Optima recall is expected to formally begin in March, at which point the owners of the 145,755 vehicles will be asked to return to their local Kia dealership where a technician will inspect and replace the clock spring as needed. For more information, owners of the affected Kia vehicles can contact Kia Customer Assistance Center at 1-800-333-4542 and inquire about recall campaign SC094.

Anonymous wrote on January 26, 2012 - 6:50pm Permalink
I had my 2007 Optima inspected today at the dealership and they told me the clock spring needed to be replaced (the air bag light has been on for over six months now) The service manger told me that the clock spring in my Optima wasn't covered under this call back. After talking to several other people in the dealership the manager said I could file a claim with KIA in March after the fact to see if I could get my 300.00 back. Now I'am driving a car with a rejected inspection sticker and I am expected to pay for a problem that the manufacture has admitted to? Sounds like a run around to me.
Anonymous wrote on January 31, 2012 - 9:46am Permalink
I had my Rondo serviced and was told this clock spring needed to be replaced and they wanted to charge me over 1000.00 to repair the problem, good thing I did not do it, it's a manufacture recall and I'll wait until the Gov't demand them to repair it under the recall in March.
Anonymous wrote on March 7, 2012 - 1:50am Permalink
I went to Kia servcie last week to complain about my Kia Optima Aibag Indicator light. Then the next day I get to know about this news & told the service certre about it. It has been a week now & they are still trying to vaidate the news. Wonder how they communicate internally when externally is faster.
Ocimar wrote on March 26, 2012 - 10:05pm Permalink
I brought my 2007 Kia Rondo dealership today to a unrelated service, and while there, they inform me about this specific recall for the clock spring. Since I am not mechanically inclined, I never heard about this before, like most car drivers anyway. The service was performed free of charge, I don t know if is because of the car is still in warranty for a few more months. This is the second recall for the Rondo in a few months, since recently there was also a issue with the rust proofing underneath the car...