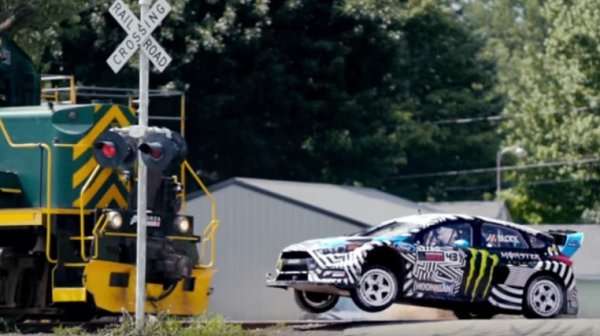 Ken Block rolled out Gymkhana 9 exactly one week ago and in that short period of time, more than 10,000,000 people have watched the original hoonigan work his motoring magic in the new Ford Focus RS RX.
Advertisement

A while back, I was talking to a guy at a car show about Ken Block and this guy commented that he never seems to hear much about Block’s videos. At that point, I had no idea that Gymkhana 9 was coming out in September and it occurred to me that outside of his rally racing action, we really hadn’t heard much from the Utah-based super-driver.

A short time later, Gymkhana 9 came out and with Block pulling off some of his most incredible stunts – including jumping the tracks in front of a train and letting the back end hang off of a dock at high speed – and I wondered if this video would prove to be as successful as past Gymkhana videos. Frankly, I wondered if this video would show a waning interest from the automotive world to watch Ken Block do his thing, but after just one week since it went live, Gymkhana 9 has gathered more than 10,000,000 views. Since I started writing this piece, the video has gotten more than 25,000 views.

In other words, while we might not have heard much about Ken Block (other than his rally racing activities), there is no question that his Gymkhana videos are as popular as ever.

Gymkhana 9 with the Focus RS
After hot hatch fans in the United States went without Ford’s highest performance Focus for years, the Focus RS has finally come to the North American market. Ken Block helped introduce the Focus RS in Germany when it was first shown to the media and for Gymkhana 9, Block is in a specially prepared Focus RS RX – packing 600 horsepower and 660lb-ft of torque.

The location of this Gymkhana video is undisclosed for the most part, but at the end, Block thanks the people of Buffalo and Eden, New York, leading me to believe that those were the areas in which this fast paced driving action was filmed.

The video starts with Ken Block walking up to the new Ford Focus RS RX in what appears to be an abandoned train station or something along those lines. After getting suited up and strapped into the car, Block fires up the 600hp, turbocharged 4-cylinder and storms out of the building. From there, Gymkhana 9 has 6 straight minutes of high speed hoonage, with all of the drifting, jumping and tire slaying action that you would expect from Ken Block.

Some of the more memorable scenes include a short stint where Block drifts around a new Ford Raptor F150 which is hanging from a helicopter, a donut session where he near drops a back tire off of a concrete dock, a close call in front of a train and the finish – where he drifts and does a monster burnout on an interesting drawbridge.

In addition to the incredible camera footage, the sounds created by Block’s new Ford Focus RS RX are incredible, so make sure to have your speakers cranked up when watching Gymkhana 9 below.

Congrats to Block and his Hoonigan team for another great Gymkhana video – and for proving how many people still love watching Ken Block work his magic.