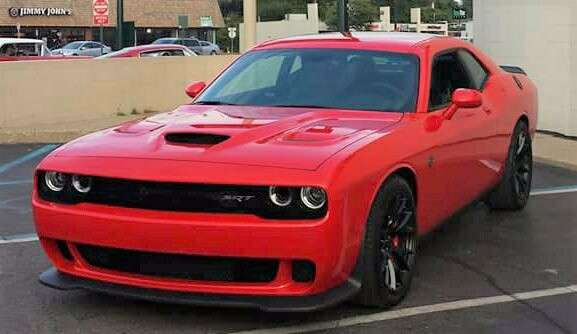 The June Hellcat of the Month as picked by the members of the SRT Hellcat Facebook page has picked this beautiful TorRed Dodge Challenger SRT Hellcat, owned by David Cach of Michigan.
Advertisement

Over the past year, TorqueNews has worked with the members of the SRT Hellcat Group Facebook page to choose the Hellcat of the Month. The members are asked to nominate 5 Hellcat cars owned by active members of the online community and once those 5 nominees are decided – the members vote on their favorite Hellcat-powered Dodge from the group.

In the June Hellcat of the Month nominations, we had 5 Hellcat Challengers selected to move onto the voting round and when the final vote was cast – David Cach’s Hellcat Challenger won by a heathy margin. David’s supercharged Mopar muscle car grabbed 46% of the votes while the second place car received just 19% of the votes, leaving no question as to which car the community wanted to take the prize this month.

After the members selected David Cach’s 2015 Dodge Challenger as the June Hellcat of the Month, I reached out to him to get the story on his supercharged muscle car and below, we have the story of his Hellcat.

David Cach’s Hellcat Challenger
I feel pretty good about being selected the winner because we all know that there are some great looking Hellcats out there. Without a doubt this has been the best and most fun car I have ever owned. It's not driven very much as I'm usually dodging rainy days here in Michigan even on my days off. It's just fun to drive whether it's to a car show or to race on Woodward Avenue at Roadkill.

My car's engine is still factory stock internally and only the basics have been done as far as I've installed a 3.09 differential, DSS aluminum driveshaft and Mickey Thompson ET Street Drag radials. This was going to be the year to send it off to Josh at HHP and have it tuned and then magic happened... I was offered an allocation for a Demon. I only hope I'm as happy with the Demon as I am with the Hellcat.

The engine compartment is completely outfitted by JLT Performance with Ultra Carbon coil covers, fuse box, coolant reservoir, intercooler reservoir and catch can. It has won a few car shows and is meticulously cared for - the OCD in me lol. The stock rims have been done in PVD Black Chrome and I get a lot of compliments on those.

My son Mike is my biggest supporter and he'll hopefully be taking over when I'm in the big car show and drag strip in the sky. He is already a member of the Hellcat community and thinks the group is great.

The super shout out goes to the SRT Hellcat Group though. This great group of people are the one's responsible for this nomination and win. The people in this group have become great friends and a few I have even had the chance to meet. Think about it - a bunch of people that never knew each other have become friends all because of their love for a car and their passion for Mopars. Whether you need help with a question or an opinion and advice, nobody ever treats you with disrespect or thinks it was a stupid question. That's class. Informative articles written by you, tips, pictures, advice, how to's, where to get it's, even the personal sharing of advice and support in personal situations...especially when I get thrown in Facebook jail and they name me “Capone Cach”. What a great group of people I've had the pleasure to know and thank you to all of the members who voted for my car as Hellcat of the Month.

So, from everyone at TorqueNews and the Hellcat Group Facebook page, congratulations to David Cach and his Dodge Challenger SRT Hellcat for being the Hellcat of the Month for June 2017.

If you own a Hellcat Challenger or Charger and you want to get involved, click here to join the Hellcat Group Facebook page!